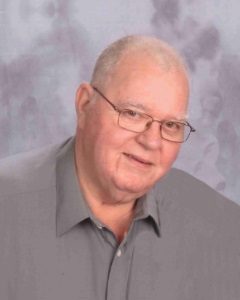 Mass of Christian Burial will be held Friday, May 10, 2019, at 1:00 P.M., at St. Anastasia Catholic Church in Hutchinson with interment in the church cemetery.

Larry Michael Smith was born on July 7, 1946, in Willmar, Minnesota. He was the son of Luvern and Alice (Anderson) Smith. Larry was baptized as an infant and confirmed in his faith as a youth. He received his education in Willmar, graduating with the Willmar High School Class of 1964.

On February 10, 1968, Larry was united in marriage to Jacquelyn Malecek at St. Mary’s Catholic Church in Willmar. This marriage was blessed with five children, Christopher, Andrew, Matthew, Jason, and Vern. Larry and Jackie lived in Willmar before making their home in Hutchinson, Minnesota in 1974. They shared 51 years of marriage.

Larry enlisted in active duty service in the United States Air Force on January 7, 1966, in Minneapolis, Minnesota. He served in England during the Vietnam War as a Jet Air Craft Mechanic. Larry was honorably discharged at the rank of Staff Sergeant on December 10, 1969, at McGuire Air Force Base in Burlington County, New Jersey.

Larry was employed as a parts manager at the Ford Dealership in Hutchinson for 34 years, before retiring in 2008. He was a member of the American Legion Post #96 and Life Member of the Elks in Hutchinson, where he was a Past Exalted Ruler.

Larry enjoyed playing bingo with his bingo buddies. He also enjoyed playing games on the computer, going to the casino, and watching television. He cherished his time spent with his grandchildren, family, and friends.

Larry passed away on Friday, May 3, 2019, at Harmony River Living Center in Hutchinson, at the age of 72 years.