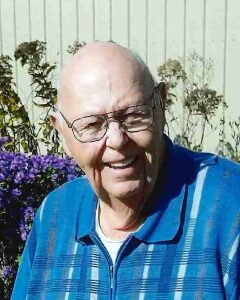 Gathering of Family & Friends will be held Thursday, January 16, 2020, from 4:00-7:00 P.M. at the Johnson-McBride Funeral Chapel in Glencoe, Minnesota, and will continue one hour prior the service at the church on Friday.

Larry Wayne Crabb was born on February 6, 1936, in Huron, South Dakota. He was the son of Leighton and Goldie (Moffitt) Crabb. Larry was baptized in 1957 by Rev. Winterburg at Wesleyan Methodist Church and later was confirmed in his faith in 1978 by Rev. Monk at Shepherd of the Hills Lutheran Church in Swift Falls, Minnesota. He received his education in Huron, South Dakota, graduating from Huron High School. Larry served in the South Dakota Army National Guard for a total of 4 years (March 26, 1957-March 25, 1961). His highest rank earned was Private First Class (PFC) and he served as a Crew Chief.

On December 8, 1957, Larry was united in marriage to Eleanor Johnson at the Methodist Church in Huron, South Dakota. Larry and Eleanor made their home in Huron, South Dakota; Swift Falls, Minnesota, and then moved to Glencoe in 1979. Their marriage was blessed with three children, Allen, Penny and Peggy. Larry and Eleanor shared over 62 years of marriage.

Larry worked for Northwestern Public Service in Huron, South Dakota; Jennie O turkey farm in Swift Falls, Minnesota; Minnegasco for 20 years and Casey’s General Store for 10 years both in Glencoe. He was an active member of Good Shepherd Lutheran Church in Glencoe. Larry was also a member of the Glencoe Lions for 25 years and volunteered for Common Cup.

Larry enjoyed fishing, playing cards and watching game shows. Family was very important to him and he loved to play tricks on his seven granddaughters.