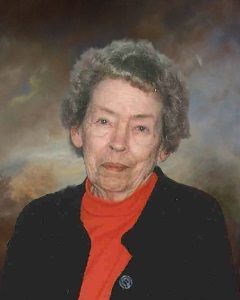 Visitation will be held Wednesday, August 7, 2019, from 5:00-8:00 P.M. at the Johnson-McBride Funeral Chapel in Glencoe, Minnesota, and will continue one hour prior the service at the church.

Laverne Ella (Wacker) Lehmberg was born on November 28, 1927, in Arlington, Minnesota. She was the daughter of Emil and Louise (Baessler) Wacker. Laverne was baptized as an infant and later was confirmed in her faith as a youth both at St. Paul’s Lutheran Church in Green Isle, Minnesota. Her confirmation verse was Psalm 145:18-19. Laverne attended school through the 10th grade.

On December 15, 1946, Laverne was united in marriage to Clarence Lehmberg at St. Paul’s Lutheran Church in Green Isle, Minnesota. After their marriage, they moved to the William Warnke farm, north of Glencoe, where they lived until the time Clarence retired. At that time, they purchased their home in Glencoe. Laverne and Clarence were blessed with two daughters, Mary and Judy. They shared over 62 years of marriage until Clarence passed away on August 22, 2009.

Laverne worked for many years at Strutwear and Telex in Glencoe. Then Laverne was the manager of Food-n-Fuel in Glencoe until she retired. After retirement she worked part-time in the Canteen at Green Giant in Glencoe. Laverne was an active member of Church of Peace since her marriage in 1946. But her work didn’t stop there, after “final” retirement they spent countless days at Lake Ida in Alexandria where she continued to “work” around the campground.

Laverne took a great deal of pleasure in her vegetable and flower gardens, She enjoyed embroidering, quilting, sewing, crossword puzzles, making jewelry, fishing, camping, watching Wheel of Fortune and The Family Feud and listening to country and gospel music. Laverne loved looking at recipe magazines, and it was hard to beat with her cooking, baking and canning. Most of all she loved her grandchildren and great grandchildren. Laverne always looked forward to spending time with them. She enjoyed cooking and baking with them and working in the garden together.

When Laverne needed assistance with her daily care, she became a resident of Harmony River Living Center in Hutchinson and passed away there on Wednesday, July 31, 2019, at the age of 91 years, 8 months, 3 days.