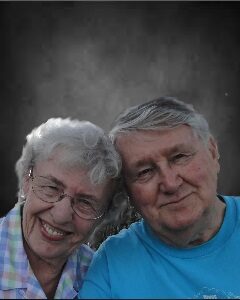 His loving wife of 70 years joined him in eternal rest shortly after his death.

Social distancing guidelines will be followed and masks are required.  Due to Covid 19 no lunch will be served.

John was born on September 28, 1928, in Pipestone, Minnesota.  He was the son of John Easton I and Thelma (Torwick) Robson.  John was baptized as an infant on May 12, 1929, and later was confirmed in his faith as a youth both at First Presbyterian church in Pipestone, Minnesota.  Lois  was born on April 16, 1926, in Sibley, Iowa.  She was the daughter of Elbert M. and Anna L. (Feldkamp) Towne.  Lois was baptized on April 10, 1938, at a Baptist Church in Canby, Minnesota, and later was confirmed in her faith as a youth.

John received his education at Pipestone, Minnesota, graduating with the Pipestone High School Class of 1946.  He furthered his education by attending St. Cloud State in St. Cloud, Minnesota, receiving a Business Administration Degree.  John then attended Carlson School of Business receiving a Master’s Degree.  He entered active military service in the United States Army National Guard on January 16, 1951, and served his country during the Korean Conflict in Alabama with Company M in the 135th Infantry Regiment of the 47th Infantry Division.  John received an Honorable Discharge on May 13, 1952, as a Sergeant 1st Class.

Lois received her education in Canby, Minnesota, graduating with the Canby High School Class of 1944.  She spent a year working in Seattle before furthering her education by attending St. Cloud State in St. Cloud, Minnesota, receiving a Teaching Degree.

On August 5, 1950, John and Lois “Toni” were united in marriage in St. Cloud, Minnesota.  John and Toni started their married life in Pipestone, MN.    Their marriage was blessed with three children, Bobbi Jean, John III and Steven.  John and Toni shared over 70 years of marriage.

John started his career working in the family business - Robson Grocery.  In 1960 John changed careers to a Hospital/Nursing Home Administrator and moved the family to Madison, SD.  From there moves were made to Mobridge, SD; Fairmont, MN; Blue Earth, MN; Le Sueur, MN; and finally, Glencoe, MN. Lois was primarily a homemaker, but also did substitute teaching in many of the communities they lived in. They were active members of First Congregational United Church of Christ in Glencoe serving and volunteering in many capacities.

John enjoyed swimming, sailing and camping.  Lois enjoyed camping and going to auctions. They cherished the time spent with their family and friends.  They were the most loving parents.  The memories, strength & sense of fun that they have instilled in us have made us who we are.

Blessed be their memory.

John and Lois were preceded in death by their Parents, John Easton I and Thelma Robson, Elbert and Anna Towne; Lois’s brothers, Murray Towne & Robert Towne.