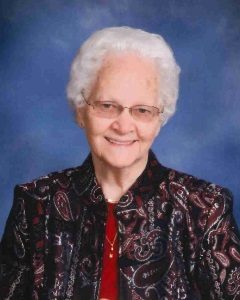 Funeral Service will be held Wednesday, May 8, 2019, at 11:00 A.M. at Faith Lutheran Church in Hutchinson with interment in Sunset Memorial Cemetery in Montevideo, Minnesota.

Visitation will be held Tuesday, May 7, 2019, from 5:00-8:00 P.M. at Dobratz-Hantge Funeral Chapel in Hutchinson and will continue one hour prior to the service at Faith Lutheran Church in Hutchinson.

Lois Viola Hoefs was born on April 18, 1926, at home in Mandt Township, Minnesota. She was the daughter of Casper and Inga (Pederson) Christenson. She was baptized as an infant and confirmed in her Lutheran faith as a youth, both at Jevnaker Lutheran Church in Montevideo, Minnesota. Lois received her education in Benson, Minnesota and was a graduate of the Benson High School class of 1943.

On September 9, 1945, Lois was united in marriage to Milton Jensen in Mandt Township, Minnesota. This marriage was blessed with five children, Stanley, Marvin, Kathryne, Susan, and Betty. Lois and Milton resided in Montevideo. They shared 35 years of marriage until the passing of Milton on March 1, 1981.

On June 23, 1984, Lois was united in marriage to Alfred “Pete” Hoefs in Rosewood Township, Minnesota. Lois and Alfred “Pete” resided in Cedar Mills, Minnesota. They shared 28 years of marriage until the passing of Alfred on October 25, 2012.

Lois was a loving wife, mother, grandmother. She proudly helped on the family farm. Lois was also employed at Control Data in Montevideo for 4 years. Lois and Pete thoroughly enjoyed selling Christmas trees in Cedar Mills. She was a faithful member of Faith Lutheran Church in Hutchinson.

Lois passed away on May 3, 2019, at Grace Living Community of GlenOaks in New London, at the age of 93 years.