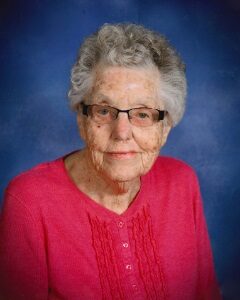 Funeral Service will be held on Monday, October 14, 2019, at 11:00 A.M. at Faith Lutheran Church in Hutchinson with interment in the Grace Bible and Presbyterian Cemetery in Silver Lake.

Lucille Jane (Jensen)Yukel was born on August 4, 1926, in Hutchinson, Minnesota. She was the daughter of Jens Alfred and Louise (Andersen) Jensen. Lucille was baptized as an infant and was confirmed in her faith as a youth at Main Street Lutheran Church (now Faith Lutheran Church) in Hutchinson. She attended country school at District #49 near Lake Marion, graduating 8th grade. In 1944 she graduated from Hutchinson High School, followed by Teacher Training School. After teaching four years at several country schools, she worked at 3M for three years.

On October 4, 1952 Lucille was united in marriage to Raleigh Yukel at Faith Lutheran Church in Hutchinson Minnesota. Their marriage was blessed with five children – Connie, Karen, Jim, Judy, and Sandy. Raleigh and Lucille made their home on the Yukel family farm, north of Silver Lake where they milked dairy cows and raised chickens & pigs. As a farmer’s wife and mother, Lucille was busy with the children, gardening, and assisting with the farm operations. After retirement in 1987, they enjoyed traveling to Alaska, Hawaii and across the country. Raleigh and Lucille shared 49 years of marriage together, until Raleigh passed away on March 28, 2002.

Lucille passed away Tuesday, October 8, 2019, at Woodstone Senior Living Community in Hutchinson, Minnesota, at the age of 93 years. Blessed be her memory.