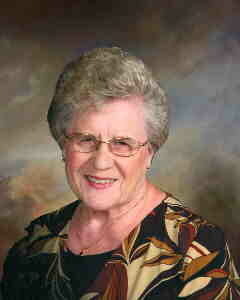 A Celebration of Life Service will be held at a later date.

Marilyn Ruth Black was born on July 23, 1934, in Gibbon, Minnesota. She was the daughter of Fredrick and Margaret (Wandersee) Pockrandt. Marilyn was baptized as an infant and was later confirmed in her faith as a youth. She received her education in Gibbon and was a graduate of the Gibbon High School.

October 22, 1952, Marilyn was united in marriage to Arden Black at Immanuel Lutheran Church in Gibbon, Minnesota. After their marriage, they farmed together in Cairo Township. They were blessed with five children. She was a loving mother, homemaker and helped on the farm. Marilyn and Arden shared 58 years of marriage when Arden passed away on August 20, 2011.

Marilyn was a member of St. John Evangelical Lutheran Church in Fairfax and a member of the Ladies Guild.

Marilyn enjoyed cooking, gardening, quilting, and traveling. She cherished the time she spent with her children, especially her grandchildren and great-grandchildren.

When she needed assistance with her care, Marilyn became a resident of Southview Living Center in Gibbon and passed away there on Tuesday, March 17, 2020, at the age of 85 years. Blessed be her memory.