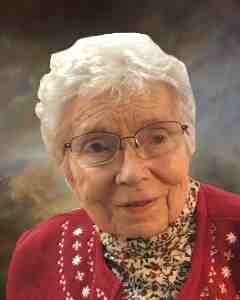 Funeral Service will be Thursday, November 7, 2019, 11:00 A.M. at American Lutheran Church in Gaylord with interment in the Gaylord City Cemetery.

Visitation will be Wednesday, November 6, 2019, from 4:00 P.M.-6:00 P.M. at the Egesdal Funeral Home in Gaylord and will continue one hour prior to the service at the church on Thursday.

Marjorie Lois Matthiae was born on February 25, 1925, in Gaylord, Minnesota.  She was the daughter of Martin and Tena (Peters) Asmus, the eldest of six children.  Marjorie was baptized as an infant and later confirmed in her faith as a youth at Immanuel Lutheran Church in Gaylord.  She received her education in Gaylord and graduated in the class of 1942.  She continued her education at St. Olaf College for one year followed by three years of nursing school at Northwestern Hospital in Minneapolis

Marjorie was married to Marvin Matthiae at St. Paul’s Lutheran Church in Gaylord on June 22, 1947.  After their marriage, the couple lived in Minneapolis so that Marvin could finish pharmacy school at the University of Minnesota.  Their first child Mary was born while living there.  They moved to Wadena, Minnesota, in 1949, where sons, Jonathan and Thomas were born. They moved back to Gaylord in 1957, buying a drugstore from Ernie Heidmann. Marjorie worked as a registered nurse in private clinics, and then at the Gaylord Hospital. She worked night shifts for a number of years, allowing her to continue to work while also helping raise three children. Marjorie also worked many years as a clerk at Matthiae Drug.

Marjorie and Marvin shared 58 years of marriage until Marvin passed away on August 31, 2005.

Marjorie enjoyed many other aspects of life in addition to work and family. She was an active member of American Lutheran Church in Gaylord.  She loved music; she enjoyed being a member and director of the choir, and was the church organist for many years. She relished volunteer work, including reading to 4th grade students for over 20 years.  She developed a strong social conscience, and supported causes working for world peace and fighting hunger.  She took Spanish language courses for several years to better relate to recent immigrants to the community.

Marjorie thoroughly enjoyed outdoor activities.  She was an avid gardener into her 90’s. She enjoyed hiking, biking, and cross-country skiing. She liked to talk about her 50th birthday that she spent in western Montana, when she first learned to ski, and decided she liked wearing blue jeans.

When Marjorie finally needed assistance with daily care, she became a resident of Oak Terrace Health Care Center on March 29, 2017. She passed away there surrounded by her children, on Sunday, November 3, 2019, at age 94. She lived a long, full life filled with friends and family; she touched so many people. She will be remembered and missed by all who knew and loved her.