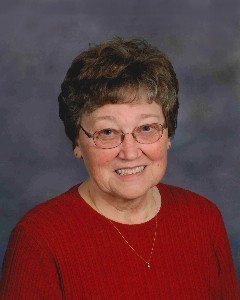 Funeral Services will be held Saturday, February 20, 2016, 2:00 P.M., at First Evangelical Lutheran Church in Glencoe, Minnesota, with interment following at the church cemetery.

Marlene Esther Winseman was born on January 19, 1937, in Plato, Minnesota. She was the daughter of Adolf and Laura (Stoeckmann) Engelke.  Marlene was baptized as an infant on January 31, 1937, by Rev. H.J. Bouman and later was confirmed in her faith as a youth on April 8, 1951, by Rev. L. Wohlfiel both at Emanuel Lutheran Church in Hamburg, Minnesota.  She received her education at the Emanuel Lutheran Church Parochial School in Hamburg, Minnesota.

On June 18, 1955, Marlene was united in marriage to Willis Winseman by Rev. L. Wohlfiel at Emanuel Lutheran Church in Hamburg, Minnesota. Marlene and Willis made their home south of Glencoe and later moved into Glencoe where they raised their family.  Their marriage was blessed with five children, Sandra, Robert, Julene, Kathryn and Thomas.  Marlene and Willis shared over 49 years of marriage until Willis passed away on April 12, 2005.

In addition to being a loving wife, mother and homemaker, Marlene milked cows in her early years and later enjoyed cooking mainly at Lindy’s and Swilleys in Glencoe. Later, she began working at Starkey’s until retirement and then she helped her daughter babysit, enjoying every minute with each baby.  Marlene was a member for a few years of the VFW Auxiliary and also a member at First Evangelical Lutheran Church in Glencoe.

Marlene enjoyed to playing cards and bingo. She loved to cook and was good at it.  Marlene appreciated watching television evangelists as she got older.  Marlene absolutely loved her family and they were her world, she looked forward to each one’s visit.

Marlene passed away on Tuesday, February 16, 2016, at the age of 79 years and 27 days at Ridgeview Medical Center in Waconia, Minnesota.