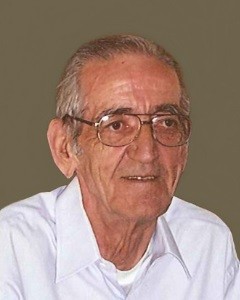 Funeral Service will be Friday, March 20, 2015, at 2:00 P.M. at First Lutheran Church in Hector, with interment in the Hector City Cemetery.  Military Honors provided by the Carl O. Potter American Legion Post 135 with Taps by great-grandson Dawson Best.

Visitation will be Thursday from 4:00 – 7:00 P.M. at the Hughes-Hantge Funeral Chapel in Hector, and will continue for one hour prior to the service at the Church on Friday.

Marvin Joseph Evenson was born August 12, 1927, in Hector, Minnesota, the son of Martin and Minnie Evenson.  He grew up in Hector, and received his schooling in Hector.  Marvin served his country during World War II in the United States Air Force.  From his entry on February 7, 1946, to his Honorable Discharge on December 8, 1948, Corporal Evenson spent over 31 months overseas.   Following his discharge, he returned to Hector.

Marvin was united in marriage to Delores Koepp on March 26, 1950 at the Acoma Lutheran Church in Cedar Mills, Minnesota. Their marriage was blessed with their son Stanley “Butch,” and daughters Susan, Sharon, Sandy, Shelia, Stacey, and Sarah.  Marvin hauled milk for many years for the Hector Creamery, and worked at Standard Motors and Direct Service gas station.  He then managed the Hector American Legion.  He also did seasonal work for Hector Ag.  In his retirement years, Marvin loved driving truck or tractors for his sons-in-law Howard and Ron.

Marvin was a member of the First Lutheran Church in Hector.  He was also a member of the Carl O. Potter American Legion Post 135 of Hector.  In his earlier years, he would garden, bowl, take the family on picnics, and go fishing.  Marvin was a very devoted husband, father, father-in-law, grandfather, and great-grandfather.

On Sunday, March 15, 2015, Marvin passed away on the way to the Hutchinson Hospital, having reached the age of 87 years.  Blessed be his memory.