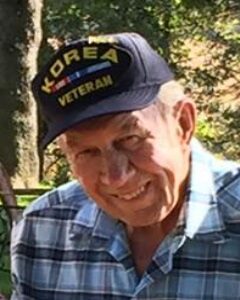 In lieu of flowers, memorials preferred to First Evangelical Lutheran Church in Glencoe or Disabled American Veterans in Hutchinson.

Melvin was called to duty in December of 1950.  He was drafted into the Army for the Korean War.  He proposed to Ruth Michaelis (Richard and Elsie Michaelis) and 2 weeks later they were married at St. John’s Evangelical Lutheran Church in Helen Township on January 12, 1951.  On January 24 he went active and left Minnesota for Camp McCoy in Wisconsin, trained in artillery.  From there he was shipped to Japan for training and then to Korea, where he spent 18 months and 16 days.  During his time in Korea he was transitioned to communications as a lineman.  He was a Golden Gloves boxer before going to Korea, and was assigned to become a member of the Army boxing team.  He boxed his way to being one match short of making the Olympic tryouts.  He was discharged in 1953.

Melvin was involved with First Evangelical Lutheran Church and First Evangelical Lutheran School on various committees, McLeod County 4-H program, McLeod County Fair Board, Glencoe VFW Post #5102 as a Post Commander and Drill Team member, Plato American Legion Post #641, served on the Helen Township Board, and as a McLeod County Commissioner.  Melvin loved farm life and was proud of his dairy operation and purebred Hampshire hogs.  He became involved with the MN Pork Producers Association.  Melvin always smiled as he reminisced about playing as a catcher with his men’s softball team in Plato.

Melvin loved his family and nothing made him happier than to have his children, grandchildren and great grandchildren at the farm where he taught them to work and have fun, including gardening and driving vehicles, or taking everyone to a good German restaurant for a celebration.