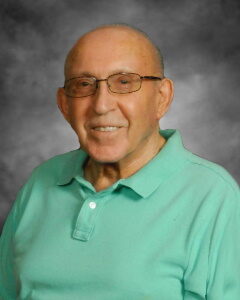 Myron J. Galles, age 87, husband of Bonnie, of Hutchinson, Minnesota, passed away on Wednesday, October 9, 2019, at his home in Hutchinson.

Funeral Service will be held on Monday, October 14, 2019, at 11:00 A.M. at Christ the King Lutheran Church in Hutchinson with interment in the Oakland Cemetery in Hutchinson.

Visitation will be held on Sunday, October 13, 2019, from 4:00-7:00 P.M. at Dobratz-Hantge Funeral Chapel in Hutchinson and will continue one hour prior to the service at Christ the King Lutheran Church on Monday.

On June 10, 1961, Myron was united in marriage to Bonita Pflughaupt at St. John’s Lutheran Church in Atwater, Minnesota. This marriage was blessed with five children, Sheri, Lori, Brian, Jodi, and Jim. Myron and Bonnie resided in Paynesville for 8 years, and then moved to Hutchinson in 1969. They shared 58 years of marriage together.

Myron was employed as a boiler operator at 3M in Hutchinson for 26 years until he retired on October 4, 1994. Myron was a member of Christ the King Lutheran Church in Hutchinson.

Myron enjoyed fishing, garage saleing, shopping at Menards, and refinishing furniture. He was an avid Minnesota sports fan especially the Minnesota Twins and Minnesota Vikings. After retiring from 3M, Myron and Bonnie wintered in Arcadia, Florida, for 24 years. Myron especially enjoyed spending time with his family, grandchildren and friends.

Myron passed away on Wednesday, October 9, 2019, at his home in Hutchinson, surrounded by his family, at the age of 87 years. Blessed be his memory.

Thanks to all the Allina Hospice staff who were so good to Myron the last 6 months.
Special thanks to Jetta and Sherry!