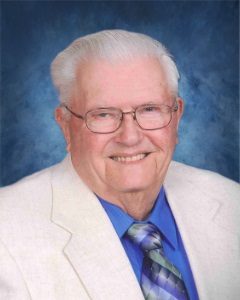 Norman Peterson, age 93, of Hector, passed away Sunday, May 12, 2019, at the Buffalo Lake Healthcare Center.

Interment will take place in the Hector City Cemetery with Military Honors provided by the Carl O. Potter American Legion Post 135 of Hector.

Visitation will be held Saturday at the First Evangelical Lutheran Church beginning at 9:00 A.M., for two hours prior to the service.

Norman Alfred Peterson was born March 4, 1926, in Belgrade Township, Blue Earth County, Minnesota, the son of Robert and Alma (Holmgren) Peterson. He was baptized on April 4, 1926, at Grace Lutheran Church in Mankato, Minnesota. In 1927, Norman’s family moved to Palmyra Township in Renville County, Minnesota, and a year later relocated to nearby Martinsburg Township. Norman grew up on this farm along State Highway 4 south of Hector. He was confirmed in his faith on June 9, 1940, at the First Evangelical Lutheran Church in Hector. Following his graduation from the Hector High School, Norman began his military service with the United States Army on March 13, 1945. He was attached to the 3469th Ordnance Medium Maintenance Company. Norman was serving in the Philippines at the official end of WWII, and received the Asiatic-Pacific Campaign Medal, the Philippine Independence Medal, and the World War II Victory Medal. Norman received his Honorable Discharge on December 5, 1946. He returned home, and studied at the Veteran’s Agricultural School in Hector.

On September 4, 1948, Norman was united in marriage to Marjorie Heerdt at Our Savior’s Lutheran Church in Bird Island. They made their home on the Peterson family farm in Martinsburg Township, and were blessed with four children, Darlene, Dennis, Alan, and Gaye. Norman was a life-long farmer. In October of 2018, Norman and Marjorie moved into Prairie View Assisted Living in Hector, and in April of 2019 they moved into the Buffalo Lake Healthcare Center. They celebrated their 70th wedding anniversary in September, 2018, with family and friends.

Norman was a life-long member of the First Evangelical Lutheran Church in Hector, and loved attending church services and the activities held there. He was currently a member of the Carl O. Potter American Legion Post 135, and was honored at the 2016 Memorial Day service in Hector for 50 years of service with the Post. His favorite pastimes were reading, traveling, and camping.

In the early morning hours of Sunday, May 12, 2019, Norman passed away at the Buffalo Lake Healthcare Center, having reached the age of 93 years. Blessed be his memory.

Norman is survived by his:

nieces, nephews, other relatives, and friends.

Norman was preceded in death by his Parents, Robert and Alma Peterson; three infant Grandchildren; Brother and his wife, Russell and Gladys Peterson; Sister and her husband, Lucille and Oscar Swanson, and by his Sister-in-law and her husband, Eileen and Richard Hueffmeier.