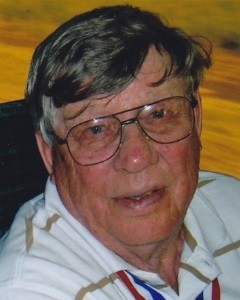 Interment will be held at a later date.

Visitation will be Friday from 5:00 – 7:00 P.M. at the Hughes-Hantge Funeral Chapel in Hector, and will continue on Saturday at church for one hour prior to the service.

Norman Clifford Gabrielson was born to Axel and Amanda Gabrielson on June 28, 1927. He grew up on a farm in Fahlun Township, north of Lake Lillian. His father died when Norman was three.

Norm was baptized on August 23, 1931 at a Methodist church east of the body of water known as Lake Lillian. “In Baptism God forgives sin, delivers from death and the devil, and gives everlasting salvation to all who believe what he has promised.” (Martin Luther)

As a child, Norm went to country school a quarter of a mile east of his home. He enjoyed riding his pinto pony, and roller-skating at the rink at Kandiyohi Lake. Norm attended high school in Atwater for one year. Later in life he completed a G.E.D.

In 1945 he enlisted in the U.S. Navy. He served aboard the U.S.S. Rodman and the U.S.S. Franklin. After his time in the military, Norm dropped the “son” from his surname.

For a while, Norm hauled gravel and did some excavating. He also drove a grain truck, which is how he met Marlene Reckow, when she was working at the east elevator in Hector. Norm and Marlene were married in 1953. They had four children: Steve, Michael, Greg, and Denise. In 1963, the family moved to the farm in Osceola Township, north of Hector, where Marlene had been raised. Norm lived the rest of his life at that location.

Norman was confirmed as an adult on March 7, 1954 at St. John Lutheran Church of Osceola Township, north of Hector. “I believe that I cannot by my own understanding or effort believe in Jesus Christ my Lord, or come to him. But the Holy Spirit has called me through the Gospel, enlightened me with his gifts, and sanctified and kept me in true faith.” (Luther)

Norm was a grain farmer for a number of years. He milked cows, and raised sheep and hogs. At various times, Norm worked as a mechanic. Later he returned to trucking. He enjoyed the freedom and adventures which came with hauling sugar beets or grain.

Norm liked old-time music. He relished “The Sunday Afternoon Polka Parade” on the radio. He also got a kick out of Slim Jim’s rendition of “Nikolina” and “The Drifting, Whistling Snow.” In his later years, Norm frequented church dinners in the area. He loved to visit with people. He was proud of his military service, and often attended veterans’ events. Norm also liked to putter around on his yard.

He passed away at the hospital in Hutchinson on October 25, 2015. “We ask in this inclusive prayer that our heavenly Father would save us from every evil to body and soul, and at our last hour would mercifully take us from the troubles of this world to himself in heaven.”(Luther)

Norman was preceded in death by his parents; by his step-father, Albert Johnson; by his grandson, Jonathan; and by three siblings, Ray, Harvey, and Ethel. “On the last day he will raise me and all the dead and give me and all believers in Christ eternal life. This is most certainly true.” (Luther)