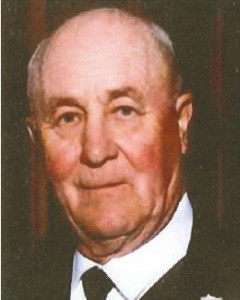 Private Family Funeral Service will be Wednesday, March 18, 2015, at 10:30 A.M. at the Hughes-Hantge Funeral Chapel in Stewart, with interment in Zion Lutheran Cemetery in Buffalo Lake.

Ortwin Gordon Schmalz was born January 27, 1924, in Preston Lake Township, Renville County, Minnesota, the son of Arnold and Louise (Braun) Schmalz.  He was baptized in 1924 at Zion Evangelical Lutheran Church in Buffalo Lake, and was confirmed in his faith there on May 2, 1937.  He received his education in rural Buffalo Lake, and graduated from the Buffalo Lake High School with the Class of 1943.

On April 23, 1964, Ortwin was united in marriage to Lucille (Niebuhr) Zimmerman at the Zion Evangelical Lutheran Church in Buffalo Lake.  They made their home on the Schmalz farmstead in Preston Lake Township.  Their marriage was blessed with six children, Pat, Keevin, Wayne, John, Carol, and Jo Ann.

Ortwin was a life-long farmer.  After Ortwin retired, he still enjoyed helping with the farm work.  He was able to live on the farmstead from his birth to 2012 when he moved into the Buffalo Lake Healthcare Center. He enjoyed farming, gardening, sight-seeing, and socializing at the local coffee shop.

On Saturday, March 14, 2015, Ortwin passed away at the Buffalo Lake Healthcare Center, having reached the age of 91 years.  Blessed be his memory.

Ortwin is survived by his:

Nieces, nephews, other relatives, and friends.

Ortwin was preceded in death by his parents, Arnold and Louise Schmalz, wife Lucille, and his grandchild Mason Martin.