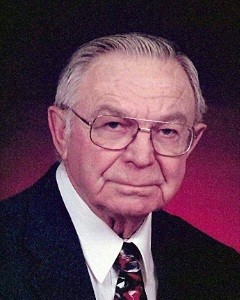 Memorial Service will be Wednesday, August 12, 2015, at 11:00 A.M. at St. Paul’s Lutheran Church in Stewart, with interment in the Church Cemetery.

Gathering of Family and Friends will be Wednesday from 9:00 – 11:00 A.M. at St. Paul’s Lutheran Church in Stewart.

Memorials are requested to St. Paul’s Lutheran Church in Stewart.

Orvel Henry Tessmer was born November 15, 1922, in Gaylord, Minnesota. He was the youngest son born to Henry and Gertrude (Ahlbrecht) Tessmer. Orvel was baptized December 10, 1922, and confirmed on April 5, 1936, at Immanuel Lutheran Church in Gaylord.  He attended parochial school and worked on the family farm.

Orvel married Leola “Ole” Ellig on October 27, 1944, at St. Johns Lutheran Church in Bismarck Township, rural Winthrop. Their marriage was blessed with three children, Randy, Neal, and Wendy. Orvel was a lifelong Lutheran parishioner where he served on the parochial school board at Immanuel Lutheran School and church councils.

Orvel and Ole worked the family farm in the Winthrop and Gaylord area until August, 1965, when he and Ole moved to Stewart, Minnesota. In Stewart, he managed the Pargas LP Gas Company until the summer of 1973 when the company was bought out.  He then started working for the McLeod County Highway Department in September of 1973 until his retirement from the county in December of 1987. In the summer of 1986, he and Ole purchased the Stewart Hardware Store which they operated until the fall of 2001. There they made lifelong dear friends, the “coffee clutch group.”

In his spare time Orvel enjoyed fishing, both in the summer and winter, traveling, playing cards, going for drives looking at the crops, and visiting with friends and family.

Early Saturday morning, August 8, 2015, Orvel passed away at the Harmony River Living Center in Hutchinson, having reached the age of 92 years.  Blessed be his memory.