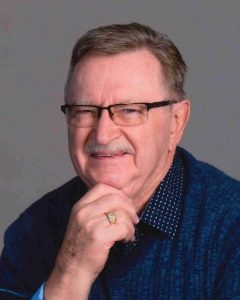 Memorial Service will be held Monday, May 13, 2019, at 11:00 A.M. at Christus Victor Lutheran Church in Apple Valley, Minnesota, with interment in the Winthrop Cemetery in Winthrop, Minnesota.

A Gathering of Family and Friends will be held on Sunday, May 12, 2019, from 4:00-7:00 P.M. at Dobratz-Hantge Funeral Chapel in Hutchinson and will continue one hour prior to the service at Christus Victor Lutheran Church in Apple Valley.

Orville Raymond Gehrke was born on June 7, 1937, in Penn Township, McLeod County, Minnesota. He was the son of Raymond and Myrtle (Ellies) Gehrke. He was baptized as an infant on June 27, 1937, by Pastor C.H. Kwalske at Grace Lutheran Church in Brownton, Minnesota. He was later confirmed in his faith as a youth on April 2, 1950, at St. Matthew’s Lutheran Church in Brownton. He received his education in rural Brownton and was a graduate of the Brownton High School Class of 1956.

Orville enlisted in active military service in the 682nd Engineer Battalion of the Hutchinson National Guard on June 30, 1959, at Fort Leonard, Missouri. He served his country and achieved the rank of Private 2nd Class. He received an Honorable Discharge on May 13, 1960.

After high school, Orville was employed at Busch Brothers, Supervalu in Gaylord, Minnesota. In 1965, Orville started working at Minnesota Mining and Manufacturing in Hutchinson, Minnesota. He retired in December of 1996 after 31 years. After retirement, Orville moved to Burnsville and began working at Nordstrom’s at the Mall of America. Also being very crafty, he was involved in many craft shows known as Old Crows Craft, for many years.

Orville had a passion for the outdoors, camping, fishing, and most of all, his numerous gardens. He was an outstanding and amazing son to his parents, Raymond and Myrtle. After his cancer diagnosis, Orville’s perspective of life completely changed. He valued every day and appreciated the little things in life. Orville remained optimistic throughout his entire journey on earth. Orville was very active in the Christus Victor Lutheran Church and bible study group. He was a member of the American Legion Apple Valley Post 1776. He also enjoyed being involved in many card groups at the senior centers. Orville’s retired life had taken him to many places of travel, such as Australia, New Zealand, Poland, Switzerland, Canada, Mexico, Alaska, and Hawaii. Orville enjoyed life to the fullest, most important to him though, was spending time with his family and many friends. He was very social and active creating many friendships to last a lifetime. Those around him were blessed with his presence and infectious soul. Orville’s philosophy was to live his best life and his hope was to leave the world a better place than when he got here.

Orville was preceded in death by his Parents, Raymond, and Myrtle Gehrke.