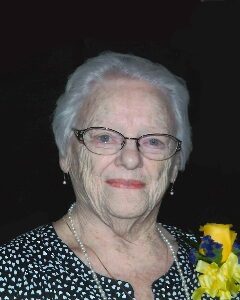 Memorial Service will be held on Thursday, January 16, 2020, at 11:00 A.M. at the Dobratz-Hantge Funeral Chapel in Hutchinson.

Gathering of Family and Friends will be held on Thursday, January 16, 2020, from 10:00 to 11:00 A.M., one hour prior to the service, all at the Dobratz-Hantge Funeral Chapel in Hutchinson.

Patsy Ruth (Ekbom) Prieve Wright was born on June 2, 1937, in Oakland, California. She was the daughter of Kenneth and Deane (Booth) Ekbom. Patsy was baptized as an infant and later confirmed at the Methodist Church in Litchfield, Minnesota. She received her education in Litchfield, and was a graduate of the Litchfield High School Class of 1955. She then attended St. Cloud State University.

On August 25, 1956, Patsy was united in marriage to Fredric Prieve at the Methodist Church in Litchfield. This marriage was blessed with three daughters, Kathleen, Beth and Laura. Patsy and Fredric resided in Hutchinson and shared 11 years of marriage together until Fredric passed away in July 1968.

Patsy then started on the next phase of her life raising three children as a single, working mother. She held various positions, each one incorporating more leadership and knowledge. She worked as a secretary at the Bethlehem United Methodist Church and then at Hutchinson High School. Patsy became the administrative assistant at the Crow River Cooperative Center. The next appointment in her working career was as the Director of the McLeod County Museum. During her tenure, the museum moved from a former school in Biscay, to the newly erected McLeod County Historical Society and Museum, dedicated in 1987. Patsy was the enthusiasm and voice of the new museum, a force behind fundraising, local tours, newsletters, and historical spotlights broadcast over KDUZ.

On May 13, 1989, Patsy married Woodrow Wright at the Bethlehem United Methodist Church in Hutchinson. Patsy and Woodrow resided in Hutchinson. They shared six years of marriage until his death in September 1995.

Patsy was an active member of the Bethlehem United Methodist Church in Hutchinson where she sang in the church choir and was a member of the United Methodist Women (UMW). After her retirement in 1990, she volunteered at the McLeod Alliance Women’s Shelter and had leadership roles in the UMW Conference at the local and state levels. She always lent a helping hand to others who needed a ride to an appointment, church or shopping. Patsy enjoyed music, crocheting, reading, crossword puzzles, and playing games. She especially enjoyed spending time with her family, grandchildren, and friends.

Patsy became a resident at Presbyterian Homes in Bloomington in 2010, where she passed away on Saturday, January 11, 2020, at the age of 82 years.

Patsy is preceded in death by her parents, Kenneth Ekbom and Deane Hayden; and spouses, Fredric Prieve and Woodrow Wright; Sons-in-law, Michael Miller and Evan Relkin.