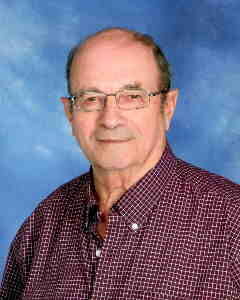 Gathering of Family and Friends will be Thursday, September 17, 2020, from 4:00 P.M.-7:00 P.M. at St. Andrew’s Catholic Church in Fairfax and will continue one hour prior to the service at the church on Friday.

Roman Joseph Huiras was born on August 12, 1939, in Sleepy Eye, Minnesota. He was the son of Roman Sr. and Gertrude (Windschitl) Huiras. Roman was baptized as an infant and was later confirmed in his faith as a youth. He received his education at country school in Leavenworth Township, Brown County, Minnesota, and was a graduate of the Fairfax High School Class of 1957.

Roman entered active military service and served his country in the United States Navy. He was stationed at the Naval Air Station in Lakehurst, New Jersey. Roman achieved the rank of E-2 on September 26, 1960. He was Honorably Discharged on April 13, 1961.

On September 8, 1962, Roman was united in marriage to Mary Lou Kokesch at St. George Catholic Church. After their marriage, the couple resided in Fairfax. They farmed in Cairo Township. Roman and Mary Lou were blessed with three children and shared 52 years of marriage when Mary Lou passed away on August 29, 2015.

Roman was an avid outdoorsman as he enjoyed fishing, hunting, and farming. He enjoyed watching Minnesota sports, and his grandchildren’s sporting events. He looked forward to having coffee every day at Smoky Hollow and visiting with friends. He loved spending time with his grandchildren, watching them play ball, selling pumpkins, going to Farm Fest where he took tickets and ushered, and spending Halloween and Christmas with them.

Roman passed away on Monday, September 14, 2020, at Abbott Northwestern Hospital in Minneapolis at the age of 81 years. Blessed be his memory.