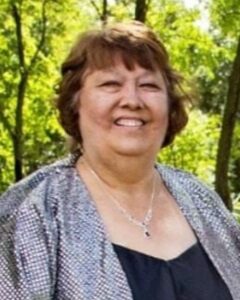 Social distancing guidelines will be followed.

Rosemary Martha Dudek was born on May 24, 1958, in Hutchinson, Minnesota. She was the daughter of Alvin and Margaret (Condon) Schlueter. Rosemary was baptized as an infant and was later confirmed in her faith as a youth both at St. Anastasia Catholic Church in Hutchinson. She received her education in Hutchinson and Silver Lake, Minnesota, and was a graduate of the Silver Lake High School Class of 1976.

On October 2, 1976, Rosemary was united in marriage to Michael Dudek at St. Joseph’s Catholic Church in Silver Lake. This marriage was blessed with four children, Scott, Andy, Tiffany, and Doug. Rosemary and Michael resided in Watertown, Minnesota, after marriage, moved to New Germany, Minnesota, and then Texas for eleven years. In 1992, they moved back to the St. Cloud, Minnesota, area. They shared 43 years of marriage.

Rosemary held various different jobs to fit around the family schedule. She was always trying to help out her family.

She enjoyed reading, watching old TV shows and movies, looking at Facebook, watching gymnastics and figure skating, and going to Dairy Queen. She also enjoyed going camping, sitting around the camp fire, and enjoying a s’more. She especially enjoyed spending time with her family, grandchildren and friends.

Rosemary fought a short battle and passed away unexpectedly on Sunday, September 13, 2020, at North Ridge Health and Rehab in New Hope, Minnesota, at the age of 62 years.

Rosemary is preceded in death by her Parents, Alvin and Margaret Schlueter.