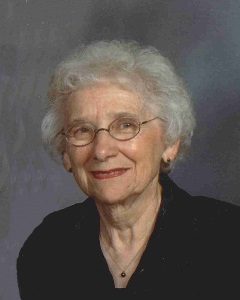 Ruth Augusta Emilia (Dammann) Schmidt Kruschke was born January 14, 1927, in Hamburg, Minnesota. She was the daughter of Herbert and Clara (Machemehl) Dammann. Ruth was baptized as an infant on January 30, 1927, and later was confirmed in her faith as a youth on April 6, 1941, both by Pastor H. J. Boumann at Emanuel Lutheran Church in Hamburg, Minnesota. Her confirmation verse was Matthew 7:13-14. She received her education in Glencoe, Minnesota, graduating with the Glencoe High School Class of 1945.

On April 13, 1947, Ruth was united in marriage to Herman George Schmidt by Pastor Louis Wohlfeil at Emanuel Lutheran Church in Hamburg, Minnesota. Ruth and Herman made their home in Glencoe, Minnesota. Their marriage was blessed with two children, Diane and Terry. Ruth and Herman shared over 28 years of marriage until Herman passed away on January 15, 1976. On February 3, 1978, Ruth was united in marriage to Ruben Kruschke by Pastor Layton Lemke at Good Shepherd Lutheran Church in Glencoe. Ruth and Ruben made their home on the Kruschke family farm until 2000 when they moved to Glencoe. They shared almost 38 years of marriage until Ruben passed away on February 2, 2016. In 2017, Ruth made her home at Grand Meadows Senior Living in Glencoe.

Ruth enjoyed decorating, flowers, fishing and traveling with Ruben. She was never happier than when she was surrounded by her family and always put them first.

Ruth passed away peacefully on Tuesday, July 9, 2019, at the Good Samaritan Society in Arlington, Minnesota, at the age of 92 years, 5 months and 25 days.