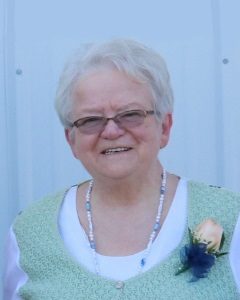 Sharon Lofstedt, age 80, of Hutchinson, Minnesota, passed away on Monday, August 12, 2019, at her home in Hutchinson.

Gathering of Family and Friends will be held Sunday, August 18, 2019, from 6:00 – 8:00 P.M. at CrossPoint Church and will continue one hour prior to the service all at church.

Sharon Marie Lofstedt was born on August 1, 1939, in Greenbush, Minnesota. She was the daughter of Edmund and Clara (Asleson) Ziska. Sharon was baptized on November 24, 1950, at First Lutheran Church in Roseau, and later confirmed in her faith as a youth on November 24, 1956, at Moe Lutheran Church in Roseau. She received her education at Roseau High School and was a graduate with the class of 1957.

On August 3, 1957, Sharon was united in marriage to Robert Lofstedt at Moe Lutheran Church in Roseau, Minnesota. This marriage was blessed with two children, Mary and Michael. Sharon and Robert resided in Roseau; then relocated to Thief River Falls in 1957. In 1960, they moved to St. Paul where they lived until 1975 when they moved to Bemidji. In 1977, Sharon and Robert moved back to Roseau and then made their home in Hutchinson in 2001. They shared 62 years of marriage.

Sharon was employed at the Roseau Times-Region and then worked as a Computer Operator at Roseau Electric Cooperative for 22 years.

Sharon was a former member of Roseau Free Lutheran Church, where she taught Sunday school and directed the Sunday School Christmas Program, Ladies Aid, and was a hospice volunteer. She attended CrossPoint Church, where she was active with Young At Heart. She was a volunteer at the Hutchinson Health Auxiliary for many years.

Sharon passed away on Monday, August 12, 2019, at her home in Hutchinson, at the age of 80 years. Blessed be her memory.