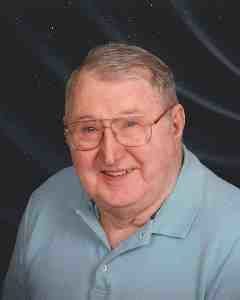 Funeral Service will be Friday, June 7, 2019, at 11:00 AM at Bernadotte Lutheran Church, Bernadotte Township, Nicollet County, Minnesota with interment in the church cemetery.

Sidney “Sid” Delmar Holberg was born on August 2, 1927, in Gaylord, Minnesota. He was the son of Victor and Ruth (Anderson) Holberg. Sid was baptized as an infant and was later confirmed in his faith as a youth. He received his education at District #46 Country School. Sid farmed his entire life.

On April 20, 1952, Sid was united in marriage to Elaine Erickson at First Trinity Lutheran Church in Jasper, Minnesota. After their marriage, the couple had a dairy farm in Bismarck Township, Sibley County, Minnesota. In 1978, he sold the cows and in 1996 they moved into Gaylord. This marriage was blessed with three children. Sid and Elaine shared 67 years of marriage.

After retirement Sid drove for Trailblazer Transit and he delivered prescription drugs for First Choice Pharmacy in Gaylord and Hanson Drug in Winthrop.

Sid was a member of Bernadotte Lutheran Church. He was a board member of the Gaylord Baseball Association and a charter member of the Forever Young Senior Center. He volunteered at Walsh Field in Gaylord. In 2012, Sid was voted Outstanding Senior Citizen.

Sid enjoyed fishing, bowling, watching baseball, playing cards, and his woodshop. He cherished the time he spent with his family, especially his children, grandchildren and great grandchildren.

When he needed assistance with his daily care, Sid became a resident of Oak Terrace Health Care Center in Gaylord on August 31, 2018, and passed away there on Saturday, June 1, 2019, at the age of 91 years. Blessed be his memory.