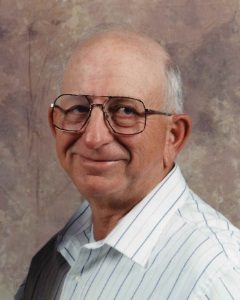 Theodore “Ted” Traxler, age 80, of Hutchinson, Minnesota, passed away on Friday, August 9, 2019, at his home in Hutchinson.

Memorial Service will be held Wednesday, August 14, 2019, at 11:00 A.M. at the Dobratz-Hantge Funeral Chapel in Hutchinson, with interment in the Oakland Cemetery in Hutchinson.

Gathering of Family and Friends will be one hour prior to the service at the funeral chapel.

Theodore John Traxler was born on February 21, 1939, at home on the family farm in Le Center, Minnesota.  He was the son of Joseph August and Rose Marie (White) Traxler.  Ted was baptized as an infant and was later confirmed in his faith as a youth.  Ted received his elementary education in his home area and was a graduate of Cleveland High School Class of 1958.  He furthered his education and earned his degree in Electronics at Mankato Area Vocational Technical Institute.

Ted joined the United States Army Reserves and served his country from 1956 until 1964 when he was honorably discharged.  Ted proudly shared stories of these times and would still recite his service number of ER17462217.

On September 29, 1962, Ted was united in marriage to Sandra Anne Keinz, at a country church in Marysburg Township in Blue Earth County.  Their marriage was blessed with four children, twin sons, Joseph and John, daughter, Connie and son, Jeffrey.  The Traxler family resided in rural Hutchinson and farmed 70 acres, until building their current home within the city of Hutchinson.  Ted and Sandy shared 56 years of marriage.

Ted was employed as an Electronic Technician at 3M in Hutchinson and retired in 1997 after 35 years of service.  Ted was a member of St. Anastasia Catholic Church in Hutchinson.

Traveling in his truck and camper was Ted’s favorite activity, with his family in younger years; Sandy always by his side…other than one solo trip he made to Seattle, WA in 2015 to see the Space Needle!  He always set up his satellite receiver, so everyone could watch the Twins around the campfire.  Ted looked forward to his annual fishing trips to Canada with family and friends.  He loved tending to his apple and plum trees, raspberries and tomato plants; the true giver in him liked to share his produce.  Ted was an excellent woodworker and enjoyed making the family smile with his furniture as gifts.  He loved playing games on his computer and reading on the internet.  Ted especially cherished the time he spent with his wife, children, and grandchildren; he was an honest family man.

Ted passed away Friday, August 9, 2019, at his home in Hutchinson at the age of 80 years.  His family will dearly miss his smile, gentle advice, and generous ways.  Blessed be his memory.