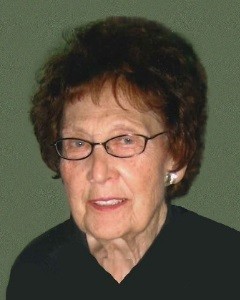 A Memorial Service will be held Saturday, March 1, 2014, at 1:00 P.M., at St. Paul’s Lutheran Church in Stewart, with interment in the church cemetery in the spring.

Visitation will be held Saturday, March 1, 2014, for two hours prior to the service at St. Paul's Lutheran Church in Stewart.

On October 3, 1937, Violet was united in marriage to A. W. “Bud” Klammer, Sr. at St. Matthews Lutheran Church in Fernando, Minnesota. This marriage was blessed with eight children, Vivian, Susan, Willis, Joan, Warren, Albion, Jr., Debra and Sheri.  Violet and Bud resided in Stewart. They shared 38 years of marriage until Bud passed away on April 6, 1976.

Violet was a loving wife, mother and homemaker.  She was a member of St. Paul’s Lutheran Church in Stewart, where she was active in the Ladies Aid.

Violet enjoyed traveling, cooking, shopping and bowling. She loved to listen to old time music and socializing with her friends. Violet especially enjoyed spending time with her family, grandchildren and friends.

When Violet needed assistance with her daily care, she became a resident of Harmony River Living Center in Hutchinson, Minnesota, on June 3, 2013. She passed away there on Thursday, February 20, 2014, at the age of 93 years.

Violet is survived by her:

Nieces, Nephews, many other relatives and friends.