You are here: Home / Obituaries / Ashley A. Karjala 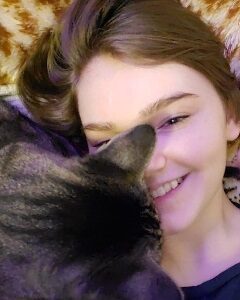 Ashley A. Karjala, age 22, of Hutchinson, Minnesota, passed away on Saturday, February 6, 2021, due to an automobile accident in Hollywood Township, New Germany, Minnesota.

Ashley Ann Karjala was born on September 5, 1998, in Virginia, Minnesota. She was the daughter of Jason and Susan (Johnson) Karjala. Ashley was baptized as an infant. She received her education with Minnesota Connections Academy and graduated in 2017. Ashley furthered her education at Ridgewater and Alexandria Technical and Community College where she received a degree in Law Enforcement and also earned her EMT certificate.

Ashley grew up in Nashwauk, Minnesota, where she worked at Hillcrest Assisted Living as a cook prior to graduating. She enjoyed all the friendships that she made with the residents. She then moved to Hutchinson and her first employment was at Culvers where she immediately became a part of the ‘Culvers Family’. She then began working at G4S Security in Chaska, Minnesota.

Ashley loved animals, especially her cat, Nagini. She also enjoyed plants, boxing, and completing jigsaw puzzles. She was very artistic and environmental. Ashley was a civil rights and political activist. She was a strong woman and stood up for what she believed. Ashley was passionate about her beliefs, and went above and beyond to help educate others and protect those she saw who needed it, both people and animals.

Ashley passed away on Saturday, February 6, 2021, due to an automobile accident in Hollywood Township, New Germany, Minnesota, at the age of 22 years.