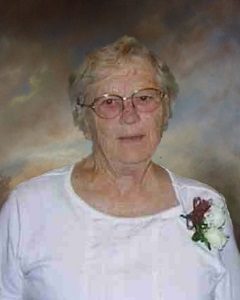 Memorial Service will be held Saturday, March 2, 2019, 11:00 A.M. at Paul-McBride Funeral Chapel in Norwood Young America, Minnesota, with interment at a later date.

Berniece Ann (Trigg) Whitaker was born on February 4, 1928, in Colman, South Dakota. She was the daughter of Lenzy and Anna (Bruns) Trigg.

In addition to being a loving wife, mother and homemaker, Berniece and Larry owned and operated a bakery in Le Sueur and Norwood until 1990 when she retired. She also helped her husband on their farm. Berniece was a member of Church in the Maples/United Methodist Church in Norwood Young America, where she volunteered for the flower sale and food shelf.

Berniece enjoyed baking, playing cards, canning, sewing, knitting, gardening and flowers. She loved to go fishing and watch the Minnesota Twins. Berniece treasured her family and the time spent with her family and friends.

Berniece passed away on Tuesday, February 26, 2019, at the Good Samaritan Society in Arlington, Minnesota, at the age of 91 years and 22 days.