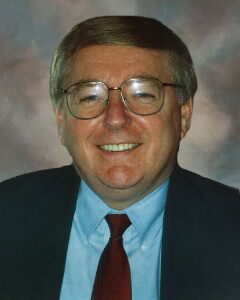 Memorial Service will be held on Wednesday, October 21, 2020, at 1:00 P.M. at St. Anastasia Catholic Church in Hutchinson, Minnesota with interment in the church cemetery.

Gathering of Family and Friends will be held one hour prior to the service at St. Anastasia Catholic Church.

Fellowship will continue at Crow River Country Club in Hutchinson with hors d’oeuvres, desserts and a Celebration of Dan’s life following the services from 3:00 to 5:00 P.M.

Memorials to the Alzheimer’s Association (www.alz.org) are preferred.

Dan was born on June 6, 1943, in La Crosse, Wisconsin.  He was the son of LaVerne and Fredaine (Springer) Holy.  He was baptized and confirmed at the St. Thomas More Church in La Crosse.  He graduated from Aquinas High School in 1961.  He furthered his education at the University of Wisconsin, Madison campus as an Evans Scholar and earned a Bachelor of Business Administration degree in Accounting.  During this time, he also worked as a page at the Wisconsin State Capitol.  He went on to receive a Master of Business Administration and CPA, and was a member of the Minnesota Society of CPAs.

Dan was united in marriage to Pamela Ferrier at St. Joseph’s Cathedral in La Crosse, Wisconsin, in 1965.  The marriage was blessed with three children, Christopher, Heather, and Elizabeth (Betsy).  Dan and Pam moved to Hutchinson, Minnesota, in 1979. They also resided in Weybridge, England, Nashville, Tennessee, and Bruges Belgium prior to retiring to Litchfield Park, Arizona.  Dan and Pam were married for 55 years.

Dan joined Cargill Inc. in 1970 and led a distinguished career that took him around the world.  His roles in Minneapolis, Minnesota, included the Assistant Manager of Corporate Accounting and VP & Group Controller.  In 1985 he had the opportunity to move to London, England, as European Controller for Cargill.  His work and travels broadened his perspective of the world and its different cultures.  He quickly became interested in learning foreign languages, teaching himself French and Spanish during his daily commute.  With his interest in international business and the economy growing, Dan changed career paths in 1991, becoming General Manager of Cargill Steel in Nashville, Tennessee.  In 1995 he moved back to Cargill’s headquarters in Minnetonka, Minnesota, as Global Economist.

After retiring from Cargill in 1999, Dan accepted a position as Deputy Secretary General at the International Iron and Steel Institute in Brussels, Belgium. This allowed him to travel globally and provide strategic leadership and economic analysis to countries and companies involved in the steel industry.  While living in Belgium, Dan and Pam enjoyed spending time at their home, which was on a canal in the center of the picturesque town of Bruges.

Dan was a natural leader and truly enjoyed meeting and talking with new people.  He was enthusiastic and determined, and those who knew him would likely say he had been a positive influence.

Dan’s interests included golfing and tennis.  He was very proud of his hole-in-one on the second hole at Crow River Country Club, May 3, 1980.  He loved teaching his grandchildren and other kids how to play tennis.  As a frequent flyer, he reached Million Mile status and had the opportunity to see the world.  In retirement, Dan enjoyed working around the yard at home in Arizona, and spending time with his family, grandchildren, and neighbors.

Dan was preceded in death by his Parents, LaVerne and Fredaine Holy; Parents-in-law, Merle and Evelyn Ferrier; and Brother-in-law, Jim Ferrier.