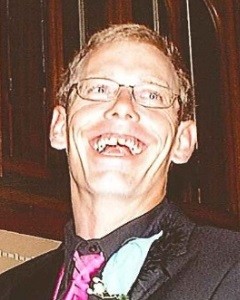 Dean Michael Lentz was born January 2, 1981, in Hutchinson, Minnesota, the son of Randy and Dorothy (Folsom) Lentz.  He was baptized on January 25, 1981, at St. Paul’s Lutheran Church in Stewart, and confirmed in his faith as a youth at St. Paul’s Lutheran Church in Hector.  Dean grew up in Hector, and graduated from the Buffalo Lake – Hector School.  He continued his education at Minnesota West, Canby Campus, and completed the two-year Auto Mechanics program.

On July 7, 2012, Dean was united in marriage to Heidee Kotila at St. Paul’s Lutheran Church in Hector.  Their family included children Lillyanna, Chloe, Harmany, Skylar, and Elayna.  They made their home in Osceola Township, and Dean worked as a farm hand for Steve and Sherrie Frank.  Previously Dean worked in Glencoe for a truck dealership, and also drove sugar beet truck.

Dean was a member of St. Paul’s Lutheran Church in Hector.  He loved demolition derbies, and drove derby #248, with his call sign as “Redneck Papa.”  He was a self-proclaimed redneck.  Dean enjoyed the company of his six dogs.  Dean also participated in ATV pulls.  He enjoyed deer hunting and ice fishing, John Deere, music, and shooting darts.  He loved to eat herring at age 6, and sauerkraut was one of his favorite foods.  Dean liked to joke around, and got along with everyone.  He will be remembered for all the fun he had with his family.

Dean passed away on Tuesday, April 1, 2014, at his residence, having reached the age of 33 years.  Blessed be his memory.

Dean was preceded in death by his Grandparents, August and Ardell Lentz, and Michael Sr. and Mildred Folsom.