You are here: Home / Obituaries / Dennis A. Rath 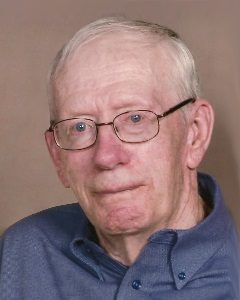 Celebration of Life will be held on Tuesday, June 11, 2019, at 11:00 A.M. at Christ the King Lutheran Church in Hutchinson with interment in the Oakland Cemetery in Hutchinson.

Visitation will be held on Monday, June 10, 2019, from 5:00-8:00 P.M. at the Dobratz-Hantge Funeral Chapel in Hutchinson and will continue one hour prior the service at Christ the King Lutheran Church.

Dennis was born at home on July 12, 1941, on the family farm outside of Buffalo Lake.  He was the son of Albert and Lorna (Inselmann) Rath. He was baptized and confirmed at the Zion Lutheran Church. He graduated from the Buffalo Lake High School in 1959. After graduation, he worked for Porter Construction and farmed part-time.

Dennis entered the army in January 1964 and was stationed in Thailand during the Vietnam War.  He received an Honorable Discharge in January 1966.  He worked at 3M Company in Hutchinson for five years and then began full-time farming southeast of Buffalo Lake.

On June 15, 1968, he was united in marriage to Dianne Urban of Dassel, Minnesota.  They shared almost 51 years of marriage. They were blessed with four children: Darrin, Doreen, Danette, and Denise.  He was so proud of his children and adored his five grandchildren.

Dennis enjoyed camping, fishing, hunting, and snowmobiling. He played Pinochle for over 45 years with the same card club.  Despite his Parkinson diagnosis 38 years ago he continued farming until his retirement at the age of 62.  In 2006, the couple moved into Hutchinson.  He never lost interest in farming.  He enjoyed trips to the country to check the progress of field crops.

In January 2018, he moved to Harmony River Living Center in Hutchinson.  Dennis and Dianne continued to take trips to visit family and to spend time at their lake cabin. He passed away peacefully on Thursday, June 6, 2019, at the age of 77 years and 11 months. Blessed be his memory.

Dennis was preceded in death by his Parents, Albert and Lorna Rath; Father-In-Law and Mother-In-Law, Fred and Lottie Urban; Infant Brother, James Rath.