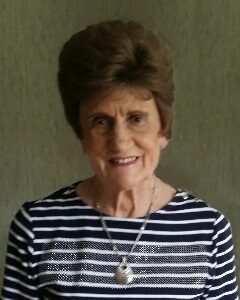 Memorial Service will be held on Saturday, February 6, 2021, at 10:30 A.M., at the Dobratz-Hantge Funeral Chapel in Hutchinson.

Dorothy Rynes was born on May 6, 1926, in Chisholm, Minnesota. She was the daughter of Fortunato “Fred” and Angela (Coggoli) Ciatti. Dorothy was baptized as an infant and was later confirmed in her faith as a youth at St. Joseph’s Catholic Church in Chisholm. She received her education in Chisholm and was a graduate of the Chisholm High School.

On March 2, 1946, Dorothy was united in marriage to Duane “Red” Rynes at St. Joseph’s Catholic Church in Chisholm. This marriage was blessed with two children, Linda and Thomas. Dorothy and Red resided in Chisholm. They shared 48 years of marriage together until Red passed away in August of 1994. Dorothy later moved to Hutchinson, Minnesota, in August of 2020.

Dorothy was a loving homemaker to her husband and children. She also worked at the sewing factory in Chisholm where she was a seamstress and made Skidoo snow wear. Dorothy became her mother’s main caretaker after she had a stroke.

Dorothy enjoyed reading and always loved having a clean house and a nice looking lawn. Dorothy especially enjoyed spending time with her grandchildren and great grandchildren.

Dorothy passed away on Tuesday, February 2, 2021, at Harmony River Living Center in Hutchinson, at the age of 94 years.

Dorothy is preceded in death by her Parents, Fred and Angela Ciatti; Husband, Red Rynes; and Son, Thomas Rynes.