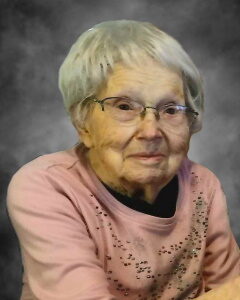 Funeral Service will be held on Tuesday, January 14, 2020, at 2:00 P.M. at the Dobratz-Hantge Funeral Chapel in Hutchinson with interment in the Oakland Cemetery in Hutchinson.

Edna Mae Kable was born on January 7, 1916, in Jackson, Minnesota. She was the daughter of Frank and Emma (Stillwell) Baker. She received her education in Jackson and was a graduate with the Jackson High School class of 1932, where Edna also received her two years of teacher certification.

On March 8, 1936, Edna was united in marriage to George John Kable at the Justice of Peace in Spirit Lake, Iowa. This marriage was blessed with five children, Roger, Daniel, Norma, Sandra, and Gordon. Edna and George resided in Jackson, Minnesota, Dolliver, Iowa, and Hutchinson, Minnesota. They shared 49 years of marriage until the passing of George on November 28, 1985.

Edna taught country school for three years. She then was self-employed at a car dealership with her husband in Jackson. In 1958, they moved to Hutchinson and started the business, Kable Furniture.

Edna enjoyed painting, reading, caring for her dog, Foxy, and crossword puzzles. She also enjoyed spending time with her family and friends, along with wintering in Florida for 8 years.

Edna passed away on Thursday, January 9, 2020, at Woodstone Senior Living Community in Hutchinson, at the age of 104 years. Blessed be her memory.