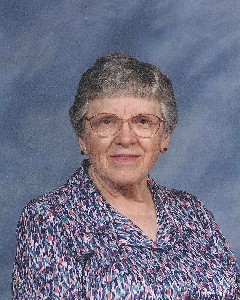 Funeral Service will be Tuesday, March 24th, 11:00 A.M. at American Lutheran Church in Gaylord with interment in the Gaylord Municipal Cemetery.

Visitation will be Tuesday, March 24th, from 9:00 A.M. until the time of the service at the church. Arrangements are with the Egesdal Funeral Home in Gaylord.

Elsie Mary Anna Bembenek was born on July 22, 1923, at home in Sibley Township, Sibley County, Minnesota. She was the daughter of Herman and Albertina (Briest) Hahn. Elsie was baptized as an infant and was later confirmed in her faith as a youth, both at Trinity Lutheran Church in Sibley Township. She received her education at Country School District #9 in Sibley Township.

On June 29, 1941, Elsie was united in marriage to Erich Bembenek at Trinity Lutheran Church in Sibley Township. After their marriage, the couple resided in Gaylord. Elsie was employed at Fingerhut and the Green Lantern Café, all in Gaylord. Elsie and Erich were blessed with five children. They shared 48 years of marriage before Erich passed away on June 29, 1989.

Elsie was a member of American Lutheran Church in Gaylord where she had served as a Sunday School Teacher. She was also a member of the American Legion Auxiliary #433, and was honored as a Gold Star Mother having lost her son, Marlin in Vietnam.

When she needed assistance with her daily care, Elsie became a resident of Oak Terrace Health Care Center in Gaylord and passed away there on Saturday, March 14, 2015, at the age of 91 years. Blessed be her memory.