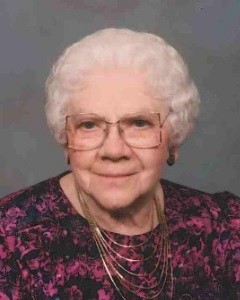 Funeral Service will be held Tuesday, April 28, 2015, at 11:00 A.M. at St. Paul’s Lutheran Church in Stewart, with interment in the church cemetery.

Esther Viola Ziemann was born February 28, 1916, at her parents’ home in Grafton Township, Sibley County, Minnesota. She was the daughter of Gust and Wilhelmiene “Minnie” (Dettman) Trojan.  Esther was baptized on March 26, 1916, at St. Paul’s Lutheran Church in Stewart, and confirmed there on April 13, 1930.  She grew up in rural Stewart, and attended District 67 School in Sibley County.

On July 10, 1936, Esther was united in marriage to Ruben Ziemann at St. Paul’s Lutheran Church in Stewart by Rev. C. H. Kowalske.  They made their home on Ruben’s parents’ farm in Round Grove Township until 1942 when they moved into Stewart.  Ruben passed away on August 26, 1993.  Esther continued living in Stewart until she moved to The Pines in Hutchinson.

Esther worked at the Stewart Public School as the school cook.  She also worked at Fingerhut and for Green Thumb, and then did housekeeping in people’s homes.  She was a member of St. Paul’s Lutheran Church in Stewart, and enjoyed quilting with the church quilting group.  An avid quilter, she made 40 quilts for family members.  Esther also did embroidery work, and family and friends have her embroidered towels as keepsakes.  She tended to her garden and flowers, and had fun playing bingo and card games.  Esther also liked to go fishing.  She enjoyed visiting with people, and especially enjoyed the time she spent with her family.