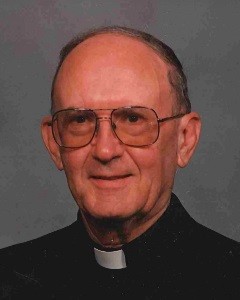 Mass of Christian Burial will be held Wednesday, December 30, 2015, 11:00 A.M. at Church of the Ascension in Norwood Young America, Minnesota, with interment at St. Joseph's Catholic Cemetery in Silver Lake, Minnesota.

Father Paul Conran Ardolf was born on January 29, 1924, in Silver Lake, Minnesota. He was the son of Frank and Alice (Hoodecheck) Ardolf. Father Paul was baptized as an infant and later received his 1st communion and was confirmed in his faith. Father Paul attended St. Joseph’s Parish school in Silver Lake, Minnesota, where the examples set by the nuns and a local priest led him toward the priesthood.  After attending Silver Lake High School for three years, he transferred to Nazareth Hall to finish high school and complete two years of college, then transferred to the St. Paul Seminary for five years, graduating and became ordained on June 4, 1949, one of a class of 12.  Father Paul gave his first Solemn Mass at the Church of St. Joseph in Silver Lake on June 7, 1949.

Father Paul Ardolf spent 66 years as a priest of the Archdiocese of St. Paul and Minneapolis, with more than 31 of those at Ascension in Norwood Young America, the parish he called “family.” Father Ardolf’s first assignment was as an associate pastor at St. Stephen’s Catholic Church in Anoka, from 1949-1963.  Following eight months at Holy Family Church in St. Louis Park, Minnesota, in 1963 he was assigned his own parish, St. Anne’s in Hamel, Minnesota, from 1964-1981.  From 1981 until 2005, Father Ardolf guided the spiritual life of the Church of the Ascension in Norwood Young America.  After his retirement, Father Ardolf continued to live in the rectory at Church of the Ascension and to serve as a priest there and at nearby St. Bernard Catholic Church in Cologne, Minnesota.  Due to failing health, he celebrated his last Mass at Church of the Ascension in February 2013 and moved to the Leo C. Byrne Residence for priests in St. Paul.

The church was Father Ardolf’s family and he loved spending time and helping anyone in need. Father Ardolf had a quick wit and dry sense of humor.  He also enjoyed traveling having visited the Redwood Forest, Germany, Vatican, Rome, even meeting the Pope.

Father Paul passed away on December 19, 2015, at the Marie Steiner Kelting Hospice Home in Chaska, Minnesota, at the age of 91 years, 10 months and 20 days.

Father Paul is survived by his:
Siblings, Alfred Ardolf and his wife, Nellie, of Ludlington, MI,
Robert Ardolf and his special friend, Nancy, of Edina, MN,
Germaine Strycharz and her husband, Ted, of New Smyrna Beach, FL;
Sister-In-Law, Mary Ann Ardolf of Glencoe, MN;
Nieces, Nephews, Other relatives and many friends.