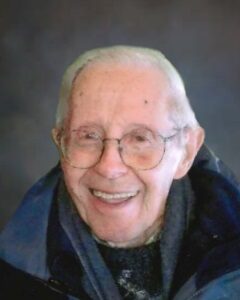 Funeral service will be held Thursday, October 3, 2019, 11:00 A.M. at All Saints Lutheran Church in Norwood Young America, Minnesota, with interment in the Fort Snelling National Cemetery at a later date.

Visitation will be held Wednesday, October 2, 2019, from 4:00 – 7:00 P.M. at the Paul-McBride Funeral Chapel in Norwood Young America and will continue Thursday, one hour prior to the service at the church.

Gerald Herbert Schuettpelz was born on June 9, 1936, in Mayer, Minnesota. He was the son of Harold William Sr. and Florence Elizabeth (Unglaub) Schuettpelz. Gerald was baptized as an infant and was later confirmed in his faith as a youth both at Zion Lutheran Church in Mayer. He received his education through grade eight at the Zion Lutheran School in Mayer.

Gerald entered active military service in the United States Army with his twin brother on April 2, 1957, at Mayer, Minnesota, and served his country. He received an Honorable Discharge on April 1, 1959, at Fort Lewis, Washington, and achieved the rank of Private First Class E-3.

Gerald enjoyed camping, quilting, and traveling, especially to Branson, Missouri. He especially enjoyed spending time with his family and going out to eat at Bump’s Restaurant in Glencoe.

Gerald passed away on Saturday, September 28, 2019, at Good Samaritan Society in Waconia, Minnesota, at the age of 83 years, 3 months, and 19 days.