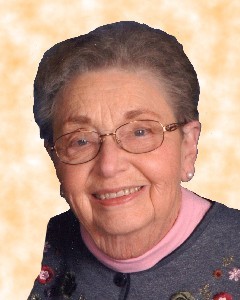 Gloria (Kuehn) Pudewell, age 78, of Winthrop passed away Monday, July 13, 2015, at the University of Minnesota Medical Center in Minneapolis.

Memorial Service will be Saturday, July 18th, 11:00 A.M. at First Evangelical Lutheran Church in Winthrop with interment in the Winthrop Cemetery.

Gathering of Family and Friends will be Friday, July 17th, from 4:00 P.M.-8:00 P.M. at First Evangelical Lutheran Church in Winthrop, and will continue one hour prior to the service at the church on Saturday. Memorials preferred to the Donor’s Choice.

Gloria Ida (Stark) Kuehn Pudewell was born on August 30, 1936, in New Ulm, Minnesota. She was the daughter of Roy and Verona (Huebner) Stark. Gloria was baptized as an infant and was later confirmed in her faith as a youth, both at St. John’s Lutheran Church, Bismarck Township. She attended District #51 School and was a 1954 graduate of the Winthrop High School. Gloria furthered her education at Mankato State College and was a 1957 graduate. She taught Junior and Senior High School in Blue Earth, Minnesota, from 1957 through 1959.

On June 27, 1959, Gloria was united in marriage to Arlan Kuehn. After their marriage, the couple farmed in Bismarck Township. She was a loving homemaker and mother. Gloria also sold World Book Encyclopedias part time. She was active in the MN-FAIR with her husband and neighbors in the fight against siting a hazardous waste dump in Sibley/Renville Counties. Gloria and Arlan were blessed with three children. They shared 23 years of marriage before Arlan passed away on April 4, 1983. After Arlan’s death, she farmed with her son, Mike. She also worked for a catering service and baked pies at Lyle’s Café. She became a health insurance counselor in 1998 for the elderly.

On January 8, 1994, Gloria was united in marriage to Clemens Pudewell.

Gloria was an active member of First Evangelical Lutheran Church in Winthrop. She helped with Daffodil Days for the American Cancer Society for 25 years; and was a 4-H leader for 10 years.

Gloria enjoyed playing on the computer, cooking, playing cards (especially Bridge), genealogy, flowers and gardening. She loved spending time with her family, especially her grandchildren. She was a very caring person and her family was important to her. She was a woman with a very strong faith. One of the most important things in her life was the kidney donation she received about 18 years ago.

Gloria passed away on Monday, July 13, 2015, at the University of Minnesota Medical Center in Minneapolis at the age of 78 years. Blessed be her memory.

Gloria is survived by her:

Mark Kuehn and his wife, Mary Anne of Eagan, MN, and

Scott Kuehn and his wife, Carla of Plato, MN;

Step-Daughter, Paula Pudewell and her husband, Jesse of Madison, WI;

Other relatives and friends.