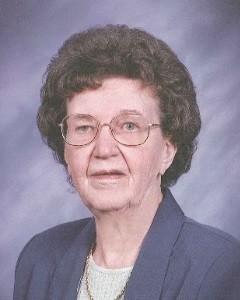 Visitation will be Saturday for one hour prior to the service at the Church.

Irene Jeannett Bjur was born on December 16, 1920, in Danielson Township, Meeker County, Minnesota, the daughter of Arthur and Hilma (Holmgren) Soder.  She was baptized and confirmed at Immanuel Lutheran church, Rosendale, Minnesota.  Irene grew up in the Rosendale area, attending country school and then attended High School in Litchfield.  She then went on to a cosmetology school in the Twin Cities.  She worked as a hair stylist in Atwater.

On July 6, 1963, Irene was united in marriage to Elvyn Bjur.  They farmed in Lake Elizabeth Township, rural Lake Lillian.  She was an active member of Immanuel Lutheran Church of Rosendale until the church closed.  She taught Sunday School for many years.  Then she transferred to First Lutheran Church of Cosmos where she was active with the Ladies group.  Irene worked seasonally at Green Giant.  She also worked many years as a Nursing Assistant at the Cosmos Nursing Home.  Irene enjoyed her flowers and garden, playing cards, putting puzzles together, traveling and spending time visiting with family and friends.  She was a member of the “Little Petunia Garden Club” and an Extension Group.

Irene moved off the farm to Cosmos in 1986.  In March of 2009 she became a resident of Cedar Crest Assisted Living where she passed away on Tuesday, February 4, 2014, having reached the age of 93 years.  Blessed be her memory.

Irene is survived by her Brother Hilmer (Mildred) Soder of Litchfield;

Nieces: Jacqueline (Steve) Kraushaar of Litchfield, Jody (Steve) Gunderson of Shakopee, and Cindy Soder of Brainerd, and Great-Nieces and Great-Nephews;