You are here: Home / Obituaries / John A. Polfliet 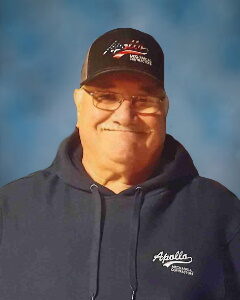 John A. Polfliet, age 73, Husband of Karen, of Hector, Minnesota, passed away on Wednesday, February 12, 2020, at the St. Cloud Hospital in St. Cloud, Minnesota.

Gathering of family and friends will be held on Sunday, February 16, 2020, from 3:00 – 7:00 P.M. at the Hughes-Hantge Funeral Chapel in Hector and will continue Monday one hour prior to the service at the church.

John August Polfliet was born on February 24, 1946, in Marshall, Minnesota. He was the son of Edmund and Martha (Buysse) Polfliet. John was baptized as an infant at St Clotilde Catholic Church in Green Valley, Minnesota, and was confirmed there as a youth. He received his education in Minneota, Minnesota, and graduated with the class of 1964.

On December 27, 1969, John was united in marriage to Karen Eischens. This marriage was blessed with two children, Mandy and Jason. John and Karen resided in Fargo, North Dakota, and later moved to Hector, Minnesota, in 1983. They shared 50 years of marriage.

After moving to Hector, John drove truck for Olinger Trucking and resumed his career as a plumber in 1997. He worked for Valley Plumbing and was a member of Local 15. John was also a member of St. John’s Catholic Church in Hector. In retirement, John replaced his love for trucking and took up driving school bus. John was a jack of all trades and was always excited to try something new.

John passed away on Wednesday, February 12, 2020, at the St. Cloud Hospital in St. Cloud, Minnesota, at the age of 73 years. Blessed be his memory.

John is preceded in death by his Parents, Edmund and Martha Polfliet; and Sister, Marilyn Weedman.