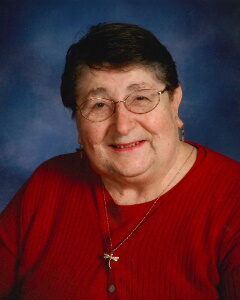 Funeral Service will be held on Friday, November 15, 2019, at 11:00 A.M. at St. John’s Church in Hassan Valley Township with interment in the church cemetery.

Joyce Margaret (Fuglsang) Karl was born on November 15, 1932, in Glencoe, Minnesota. She was the daughter of Andrew and Edith (Hatz) Fuglsang. Joyce was baptized as an infant and was later confirmed in her faith as a youth both at First Congregational Church in Glencoe. She received her education in Glencoe and was a graduate of the Glencoe High School Class of 1950.

On November 26, 1950, Joyce was united in marriage to Joseph Karl Jr. at First Congregational Church in Glencoe by Reverend Merton. This marriage was blessed with three children, Julie, Jim and Jerome. The family resided on their farm south of Cedar Mills, Minnesota. Joyce and Joseph shared 59 years of marriage until Joseph passed away on August 25, 2010.

Along with helping out on the farm, Joyce was employed at Cash Wise Foods in Hutchinson as a “Demo” lady. Joyce was an active member of the Congregational Church in Hutchinson where she was active in the Women’s Guild. Later, Joyce joined St. John’s Church in Biscay, Minnesota, with her husband Joe. She was also a member of the American Legion Auxiliary Unit 125 and was a member of the Red Hat Society. Joyce volunteered at the Hutchinson Health Auxiliary Thrift Shop, was a 4H Leader for several years, and was involved in the Home Extension Group in Renville County.

Joyce enjoyed fishing, spending time at the lake, playing cards, and Bingo. She especially loved to bake and travel. She was a loving mother and cherished spending time with her family, grandchildren, and friends.

After Joyce received care at the Ecumen Oaks Assisted Living, she moved to the Litchfield Nursing Home where she was very proud to have played matchmaker for her Grandson, Evan and his wife Stephanie. She was also happy and blessed to have a great-granddaughter, Josie. On December 23, 2014, Joyce became a resident at Harmony River Living Center in Hutchinson. She passed away there on Tuesday, November 5, 2019, at the age of 86 years. Blessed be her memory.