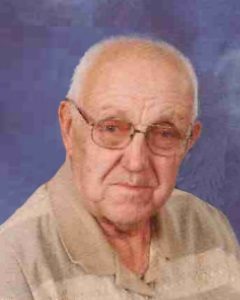 Memorial Service will be held on Thursday, February 21, 2019, at 11:00 A.M. at Peace Lutheran Church in Hutchinson with interment in Oakland Cemetery in Hutchinson.

A Gathering of Family and Friends will be held Wednesday, February 20, 2019, from 5:00 P.M. to 7:00 P.M. at Dobratz Hantge Funeral Chapel in Hutchinson, and will continue one hour prior to the service at the Church.

Military Honors will be provided by the Hutchinson Memorial Rifle Squad.

Louis “Louie” Hugo Zumach was born on May 4, 1931, in Hutchinson, Minnesota. He was the son of Christ and Mabel (Frank) Zumach. Louie was baptized as an infant and later confirmed in his faith in 1946, both at Peace Lutheran Church in Hutchinson. He received his education in Hutchinson.

On November 10, 1955, Louie was united in marriage to Dorothy Bauman at the Basilica of Minneapolis, Minnesota. Louie and Dorothy made their home in Hutchinson. Their marriage was blessed with 5 children, Debbie, Don, Tammy, Chris and Robert. Louie and Dorothy shared 63 years of marriage.

Louie was employed at Goebel’s Cabinet and Fixture Co. as a cabinet maker, and most recently an installation supervisor. He worked there for 45 years before retiring in 1993. In his spare-time, he enjoyed working for Anderson Interiors hanging curtains. He was a member of Peace Lutheran Church in Hutchinson. He was also a member of the American Legion Hutchinson Post 96 for 55 years.

Louie passed away on Saturday, February 16, 2019, at Cedar Crest Estate in Silver Lake, Minnesota, at the age of 87 years.

Louie is survived by his:
Wife, Dorothy Zumach of Hutchinson, MN;
Children, Debbie Smith and her husband, Doug, of Amboy, WA,
Don Zumach and his wife, Darcy, of Batavia, OH,
Tammy Mackedanz and her husband, Larry, of Stewart, MN,
Chris Zumach and his wife, Julie, of Buffalo, MN;
15 Grandchildren;
10 Great-Grandchildren;
Siblings, Betty Chatfield and her special friend, Steve, of Monticello, MN;
Special Friend, Ray Zimmermann;
Nieces, Nephews, other relatives and many friends.