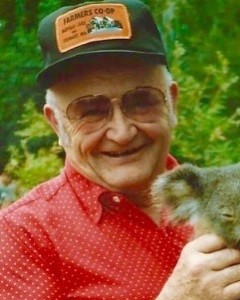 Visitation will be Friday from 4:00 – 7:00 P.M. at the Hughes-Hantge Funeral Chapel in Hector, and will continue Saturday at the church for one hour prior to the service.

Orlo Wilton Fluhrer was born November 14, 1924, in Greenleaf Township, Meeker County, Minnesota.  He was baptized as an infant, and was later confirmed in his faith at Churchill Methodist Church in Brookfield Township, rural Hector.  He lived with his parents, George and Maud (Behrns) Fluhrer, on their farm in Brookfield Township. Orlo attended Boon Lake country school, and graduated from the Hector High School in 1942.  Being raised on the farm, he continued to help with the farming after graduation.

On September 20, 1952, Orlo was united in marriage to Patricia Silker at the United Methodist Church in Hector.  Five children blessed their union, John, Kevin, Katherine, Robert, and a son who died in infancy. The couple farmed in Brookfield Township, and had shared 42 years of marriage when Patty passed away in 1994.

Orlo married Marlene (Reckow) Gabriel in 1996.  They made their home in Buffalo Lake, and enjoyed many winters together in Surprise, Arizona. After Marlene passed away in 2005, Orlo continued to live in Buffalo Lake.  He moved into the Buffalo Lake Healthcare Center in 2007.

Orlo loved farming, his life’s work and passion.  The Masons were also a big part of his life.  He was raised a Mason on March 24, 1947, and was a faithful member of the Hector Masons Lodge 158 for 68 years.  Orlo was a member of the Hector United Methodist Church.  He loved to travel, and was able to extend his travel to Europe, England, New Zealand, and Australia. Orlo was blessed with a beautiful voice, and loved to sing.  He sang at many weddings and funerals.

Late Tuesday afternoon, August 4, 2015, Orlo passed away at the Buffalo Lake Healthcare Center, having reached the age of 90 years, 8 months, 20 days.  Blessed be his memory.

Orlo is survived by his children:

Orlo was preceded in death by his Parents, Georgie and Maudie Fluhrer, Wife Patricia, Wife Marlene, his son in infancy, and by his brothers and sisters.