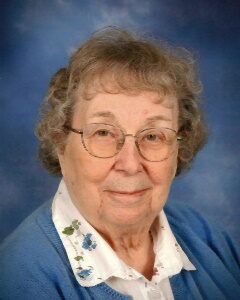 Funeral Service will be held on Saturday, November 30, 2019, at 11:00 A.M. at Peace Lutheran Church in Hutchinson with interment in the Oakland Cemetery in Hutchinson.

Renee Marie Maahs was born September 15, 1923, in Northeast Minneapolis, Minnesota, to Alexander and Aurelia (Rosendahl) Pfeifer. She was baptized as an infant and confirmed in her faith at St. Clements Church in Minneapolis. She received her education from Edison High School; she then continued her education at The University of Minnesota and worked at a bank in downtown Minneapolis, where she met lifelong friends, one becoming her sister-in-law. Her parents owned a cabin on Lake Washington near Darwin, Minnesota. They would go to Darwin and at one of those times; she met her future husband, a local farm boy, at a dance.

She and Richard Maahs were married on February 7, 1946, at St. Charles Borromeo in Northeast Minneapolis. This marriage was blessed with 5 children, Dave, Terry, Gary, Anita, and Heidi. Richard and Renee made their home on a farm in Ellsworth Township and later moved to Hutchinson, Minnesota. She was grateful to her mother-in-law who taught her how to “can” and garden.

For a while, she and her daughter Terry worked together in a painting business. Renee was very talented with color and design.

Renee was a loving wife, enjoyed going to dances with friends, going on trips in the motor home, and going fishing in Canada. She was a member of the VFW and American Legion, but most of all she loved spending time with her family.

When Renee developed dementia Richard became her care provider until 2012, when he was diagnosed with a malignant brain tumor. Together they moved to a care facility in Gaylord, Minnesota. Renee moved into the memory care unit and Richard into the nursing part of the facility. Every day they would bring Renee to Richard where they would sit on the couch holding hands watching the birds. The nurses would comment on how wonderful they were together and were blessed by them.

When Richard passed away Renee moved back to Hutchinson, Minnesota to Woodstone Senior Living memory care unit. She was the first and only resident for a while so she had the whole staff to herself who dotted on her. They loved her quick wit and one-liners, which she kept until her passing.

Renee is preceded in death by her husband; her parents; Brothers, Eugene and Claude Pfeifer; Sons, Dave and Gary Maahs; Daughter, Terry Riebe.