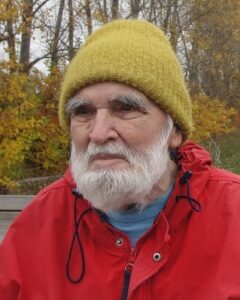 Guy Eldridge Stone Jr. was born August 23, 1938, in Selma, Alabama, the son of a restaurateur and oldest of eight children. He was the son of Guy E. Sr. and Beulah (Guinn) Stone. As a natural athlete, he played football in high school and worked as lifeguard and waterfront director at Camp Grist, a YMCA camp in Selma, while he was in college. He also was very artistic, writing poetry and creating watercolor paintings of forests and cabins in Alabama.

Guy also sang and played the guitar, and was a member of the Brush Arbor Boys with Rev. Brian Brosz in Hutchinson.

Studying to be a clergy, he attended Phillips University and seminary in Enid, Oklahoma, where he also met and married his wife, Katherine Tibbe. Together they had a daughter Mary Catherine and a son William Eldridge.  Being a very mobile family, they lived in Lawrence, Kansas, Lorain, Ohio, Minneapolis, Sioux Falls, South Dakota, and Grand Forks in North Dakota.

Guy was ordained into the ministerial profession in 1965. Also, in 1965 he was privileged to witness the Rev. Martin Luther King leading his famous Voting Rights march from the Edmund Pettus Bridge in Selma to the capital city of Montgomery.

Guy combined his athletic skills and clerical talents to lead more than 50 canoe camping trips to the Boundary Waters Canoe Area Wilderness of northern Minnesota, leading youth groups from his churches. In all of the fifty trips that Guy led, there was never an accident, never an injury, never an illness. All of the trips that he led were amazing spiritual experiences for all who participated.

Guy retired from the ministry in 2002 and moved with his wife Kathy to Hutchinson, Minnesota, where they still are blessed with wonderful and caring friends. In 2015, he was diagnosed with Parkinson's Disease and became a resident at the Harmony River Living Center in Hutchinson. His favorite food, grits, was prepared for him every morning for breakfast, and they were the last food he ever ate.

Guy passed away on Thursday, February 18, 2021, at Harmony River Living Center in Hutchinson, at the age of 82 years. His body has been donated to the Brain and Tissue Program at the University of Maryland, where research will be performed to study Parkinson's Disease.

Guy will be remembered by all his wonderful friends, his family, and all the former kids who went on canoe trips. If there are no canoes, paddles, and rip-stop tents in Heaven, there will be soon.

Guy is preceded in death by his Parents, Guy Sr. and Beulah Stone.