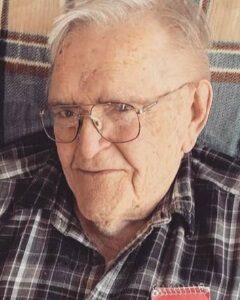 Visitation will be one hour prior to the service at the church on Friday.

Robert Theodore Case was born on August 30, 1927, at his home in Fairfax, Minnesota. He was the son of Theodore and Maude (Pickle) Case. Robert was baptized as an infant and was later confirmed in his faith as a youth. He received his education in Fairfax and was a graduate of the Fairfax High School Class of 1945.

Robert entered active military service on August 29, 1945, and served in the United States Navy during World War II and the Cold War. He achieved the rank of Seaman First Class and received the World War II Victory Medal and the American Area Campaign Medal. Robert was Honorably Discharged on November 5, 1947.

Robert was united in marriage to Donna Kemkes on December 28, 1953, at the Sacred Heart Parish in Franklin, Minnesota. After their marriage, the couple lived in Fairfax, Minnesota. This marriage was blessed with four children. Robert was employed as a mechanic, salesman and managed a co-op, retiring in 1985. Robert and Donna shared 53 years of marriage when Donna passed away on January 4, 2007.

Robert was a member of St. Andrew’s Catholic Church in Fairfax and the Fairfax Legion Post #205. He was a longtime member of the Fairfax Fire Department and also served on the police commission.

Robert was a proud member of the Fairfax community, he passed away in the home where he was born in.

Robert enjoyed ball games, going to the horse races, fishing, watching the trains, and jigsaw puzzles. He cherished the time he spent with his family, especially his children, grandchildren, and great grandchildren.

Robert passed away peacefully surrounded by his family, at his home on January 8, 2021, at the age of 93 years. Blessed be his memory.