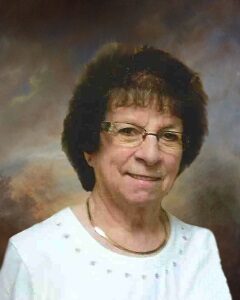 His loving wife of 49 years joined him in eternal rest shortly after his death.

Combined Gathering of Family & Friends will be held Monday, September 14, 2020, from 4:00-7:00 P.M. at the Johnson-McBride Funeral Chapel in Glencoe, Minnesota.

Military Honors will be provided by the Glencoe VFW Post #5102 at 4:00 P.M. at the funeral chapel parking lot.

Social distancing will be followed and masks are required.

Clarence “Schmitty” Henry Schmidt was born on November 6, 1940, in Litchfield, Minnesota.  He was the son of Leo Joseph and Cecelia Elizabeth (Bongaarts) Schmidt.  Rosemary was born on August 20, 1938, in Darlington, Wisconsin.  She was the daughter of John W. and Charlotte (Hediger) Kampfer.  Clarence attended St. Peter & Paul Catholic School (St. Pius X) and Glencoe High School.  In November, 1957, he joined the Navy.  After basic training in San Diego, California, he was then stationed in Beeville, Texas.  Meanwhile, in Wisconsin, Rosemary attended school in South Wayne, Wisconsin, achieving her GED in 1956.

While Clarence was working with Distribution Construction Co. piping towns for natural gas around the upper Midwest in the 1960’s, he found himself in Wisconsin where he met Rosemary.  She was working for Frito Lay and then traveled with him as he was assigned to other areas.  On September 3, 1971, they were united in marriage at Grace Lutheran Church in Watertown, South Dakota and made their home in Glencoe.

In 1986, Clarence went to work for Mueller Pipeliners later called InfraSource Underground Construction until his retirement in 2004.  He was a member of the Local 49’s Union (Operating Engineers) for over 37 years.  During his retirement he could not sit still, so he drove truck for the sugar beet harvest.  Clarence was a member of the Glencoe VFW Post #5102 and the Glencoe Sportsmen’s Club.

Rosemary was employed with the Telex Corporation in Glencoe and in November 1980, began her career at Starkey Hearing Technologies in Glencoe until her retirement in 2002 as a production manager.  She was one of the original employees with Starkey’s when they opened up a facility in Glencoe.  Rosemary took pride in taking care of their home and garden while Clarence was traveling for work and always made sure the RV was stocked and ready to go when he got home.

Clarence enjoyed deer hunting.  Clarence along with Rosemary loved attending rodeos, Winstock and tractor pulls in their RV.  They also enjoyed spending time at their cabin north of Two Harbors, Minnesota, socializing at the VFW and playing a good game of solitaire.  Clarence and Rosemary treasured the time spent with their family and friends.  The door was always open and the fridge was always stocked.

Blessed be their memory.

Clarence and Rosemary are survived by;
Clarence’s Brothers, Thomas George Schmidt and his wife, Helga (Amtsfeld), of Glencoe, MN,
Donald Leo Schmidt and his wife, Mary (Ryan) of Buffalo, MN;
Rosemary’s Sisters, Marguerite “Maggie” Stoehr and her husband, Robert, of Monticello, WI,
Ruth Wells and her husband, John, of Monticello, WI,
Nieces, Nephews, Cousins, Other relatives and many friends.