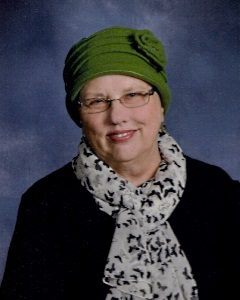 A Mass of Christian Burial will be held on Tuesday, May 21, 2019, at 11:00 A.M. at St. Anastasia Catholic Church in Hutchinson, with interment in Oakland Cemetery in Hutchinson.

Sue Ellen Decker was born on July 4, 1948, in St. Paul, Minnesota. At the age of 4 months, she was lovingly adopted by Harold and Delores Decker. She was an only child for 10 years before a baby girl, Jane, joined the family by adoption. The following year the family adopted brothers Bob, Ray, and Tim.

Sue grew up in the Stewart, Minnesota, area surrounded by a large extended family which included numerous cousins, where there were always many unforgettable 4th of July celebrations held every year. She was baptized and later confirmed on May 15, 1959, at St. Boniface Catholic Church in Stewart. She attended St. Boniface Catholic School and graduated from the Stewart High School.

Sue married her high school sweetheart, Ken Dwyer, in 1969 at Saint Boniface Catholic Church in Stewart when he returned from his tour of duty in Vietnam. Sue and Ken then moved to Illinois. They were blessed with three children, Dori, Shauna, and Korey. They remained in Illinois where Ken was stationed and raised their family there. Sue and Ken were active in their church, school, and community. They made remembrance items for First Communion and Confirmation classes at St. Malachy School, where their children also attended. Sue and Ken were known to have coordinated numerous fundraisers for their school. Sue was involved in Girl Scouts and received the Girl Scout Leader of the Year Award. She took much pride in receiving such an award of distinction.

Sue graduated from the College of St. Catherine and eventually received her bachelor’s degree from Eastern Illinois University. She found the type of nursing she loved most was working in home care and hospice. A highlight of her professional career was a private conference meeting with Dr. Elisabeth Kubler-Ross, a Swiss-American psychiatrist, a pioneer in near-death studies. Sue was proud to be a part of the first downstate hospice in Illinois. She was a member of the AIDS Panel at the University of Illinois Medical School.

Ken and Sue moved back to Minnesota in 1997. Sue was diagnosed with breast cancer in 2006. She was involved in the Relay for Life McLeod County for a number of years. She was a member of St. Anastasia Catholic Church, the Gerontological Nursing Association, and American Legion Auxiliary Unit 143 in Brownton. Sue enjoyed crocheting especially filet crochet. She held “diaper parties” at her home making diapers that were distributed to Guatemala, Liberia, and Haiti. She was extremely proud of her grandchildren and was sure to let others know about them. She was their biggest cheerleader and enjoyed attending their church and school events.

Sue passed away peacefully in the early morning of May 16th, 2019, at the Mayo Clinic Health System in New Prague.

Sue is survived by her Children, Dori Dwyer, Shauna Sokolis and her husband, Rich, Korey Dwyer and his fiancée, Alyssa; Grandchildren, Nick Sokolis, Emily Sokolis, and Charlie Dwyer; Siblings as well as their spouses, Keith Tongen, Helene Decker, Sherry Bazille; and her special friends in the stage 4 breast cancer support group at Abbott.