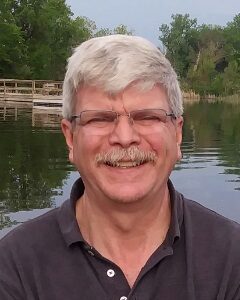 Memorial Service will be held Thursday, October 10, 2019, 11:00 A.M. at United Methodist Church in Hector with interment following at the Hector City Cemetery in Hector.

Gathering of Family & Friends will be held Wednesday, October 9, 2019, from 4:00-7:00 P.M. at the Hughes-Hantge Funeral Chapel in Hector and will continue one hour prior the service at the church on Thursday.

Tracy Lee Johnson was born on March 29, 1961, in Olivia, Minnesota. He was the son of James and Verna (Roepke) Johnson. Tracy was baptized as an infant at First Lutheran Church in Hector and was later confirmed in his faith as a youth at United Methodist Church in Hector. He received his education in Hector, and was a graduate of the Hector High School Class of 1979.

Tracy made his home in Buffalo Lake for a short time and then Hector, Minnesota. His life was blessed with two sons, Matthew and Luke. Throughout his life, Tracy was a carpenter and later a livestock farmer at various farms. For the last 10 years he worked at Homan Family Farms. Tracy was a member of United Methodist Church in Hector and the National Rifle Association.

Tracy was a proud father and cared for his parents. He had a quick dry sense of humor. Tracy was an avid outdoorsman and loved nature. He enjoyed watching birds and wildlife from the window of his home, hunting, fishing, telling stories, watching sports and NASCAR. He especially cherished spending time with his family.