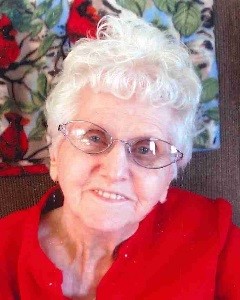 Virgean Lucille (Holt) Ziska was born on November 28, 1921, in Ellsworth, Iowa.  She was the daughter of George and Anne (Braland) Holt.  Virgean was baptized as an infant on January 6, 1922, at Tabitha Lutheran Church in Rose Grove, Iowa, and was later confirmed in her faith as a youth on May 9, 1937, at Windom Evangelical Church in Windom, Minnesota.  She attended Windom Country School till the 8th grade.

On December 22, 1962, Virgean was united in marriage to Louis Ziska at Windom Evangelical Church in Windom, Minnesota.  The couple made their home in Bongards and Norwood Young America, Minnesota.  In 2001, Virgean became a resident of assisted livings in Victoria, Murdock and spent the last 4 years in Sunburg, Minnesota.  Virgean and Louis shared over 34 years of marriage together until Louis passed away on November 9, 1997.