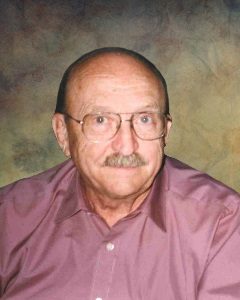 Memorial Service will be held on Saturday, February 2, 2019, at 10:30 A.M. at Bethlehem United Methodist Church in Hutchinson with spring interment in Sumter Cemetery, rural Brownton, and McLeod County, Minnesota.

Visitation will be held on Friday, February 1, 2019, from 5:00-7:00 P.M. at Dobratz-Hantge Funeral Chapel and will continue one hour prior to the service at the church.

William “Bill” Carl Hochsprung was born on April 18, 1929, in rural Brownton, McLeod County, Minnesota. He was the son of William C. Hochsprung and Laura Emilie Selle. Bill was baptized as an infant and was later confirmed in his faith by Reverend Gerhardt Schmidt, both at Immanuel Lutheran Church in Brownton. He received his education in Brownton, and was a graduate of the Brownton High School Class of 1948.

Bill began his career farming with his Parents-In-Law, Adry and Violet Peik. Bill continued to farm for many years while Carolyn taught kindergarten in Glencoe. Bill retired from farming in 1987.  He then worked for Mystic Lake Casino where he made many friends. Bill became a member of Bethlehem United Methodist Church in Hutchinson after the closing of the church in Brownton. He was a member of the Brownton Rod and Gun Club and was instrumental in getting the clubhouse built which is still in operation. He was also Chairman of the Day Activity Center board in Biscay, MN and was a leader in getting Averyon home built in Hutchinson. Having a son with special needs gave Bill a passion for helping to provide services for others with special needs.

Bill enjoyed fishing, spearing, hunting, playing cards and ballroom dancing. He also enjoyed extensive travel, including trips to London, Spain, Greece, Turkey, and China among many others. In later years he enjoyed pulling the “One Arm Bandits in Laughlin, Nevada. Bill liked to promote spirited political discussions among family members. He enjoyed spending time with his family, grandchildren, great-grandchildren and friends.

Bill passed away peacefully on Saturday, January 26, 2019, at the Harmony River Living Center, at the age of 89 years.

Bill is survived by his: